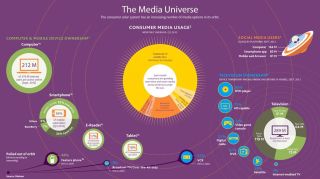 NEW YORK— Nielsen reports that 85 percent of U.S. consumers subscribe to pay TV, with digital cable garnering 52 percent and satellite capturing 33 percent of subscriptions. The percentage of broadcast TV/over-the-air-only households was pegged at 9 percent, down from 16 percent in 2003, according Nielsen’s report, “The Media Universe.” The over-the-air sector was illustrated in the accompanying graphic as “pulled out of orbit,” indicating decline in usage, along with feature phones and VCRs. On a daily basis, U.S. consumers view approximately six hours and 54 minutes of “traditional” TV, while the next most popular method of viewing video was “Internet on a Computer” which was logged at 28 hours and 29 minutes per month.

Nielsen noted that 289 million people own at least one television, with the majority (119 million) owning four sets. Only 31 million own just one set. Eighty-six percent own a DVD player and HDTV ownership is tagged at 75 percent. Only 4 percent reported owning Internet-enabled TV.

The 9 percent broadcast-only figure conflicts with a claim by NAB last summer that the percentage of OTA-only households in the United States was increasing. According to a survey conducted by Knowledge Networks, nearly 18 percent were reported as “broadcast exclusive” households, totaling 54 million Americans, up from 46 million in 2011.

“The Media Universe.” report, a snapshot of media usage in Q2 2012, is a consolidation of more than a dozen Nielsen reports issued throughout the year.