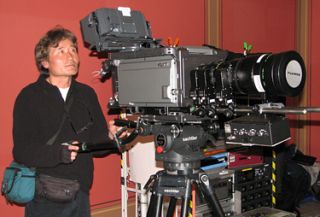 NHK, the Japan Public Broadcasting Corp. has been touting a greatly enhanced form of high-definition television for about a decade now, with special screenings of the 4,000 line video the system produces at several NAB Shows. Super Hi-Vision, or SHV, as the system is called will be back this April, but with some slightly different eye candy.

An NHK crew arrived in Washington D.C. during the weekend of Feb. 5 to capture some of the more iconic scenes from the nation’s capital to be included in a new demonstration “reel” that will be premiered at this year’s show.

According to Eric Wolf, who accompanied the crew and is a member of PBS’s Office of the Chief Technology Officer, the crew recorded scenes at the Capitol Building, the Mall, the Washington Monument, the National Gallery of Art, the Newseum, Union Station, the National Cathedral, Georgetown, and the Library of Congress.

“Their last stop will be at Arlington National Cemetery and then they’re going back to Japan and start posting their work to have it ready for NAB in April,” said Wolf. “The plan is to produce about five minutes to be included in the SHV demo reel. The whole project is designed to provide images of some of the most beautiful areas in Washington.”

The special camera used for the Washington shoot is one of only four SHV that have been constructed so far, and one of two of the latest generation of the ultra high-resolution devices that exist. SHV recording technology continues to evolve too, with image storage now being done in flash memory rather than the hard drive array used previously.

Wolf said that PBS had worked together in the past on similar demonstrations during the development of high-definition television and that 2020 has been set by NHK as the date for commercialization of the Super Hi-Vision technology.