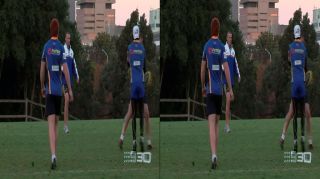 TURIN, ITALY: A broadcast and technology consortium in Italy is demonstrating an over-the-air digital 3DTV system that is backward-compatible with 2D TV sets, according to one of its members. The group held a news conference last week in Turin announcing the implementation of the system in the northern Italian region of Piemonte.

Participants included Sisvel Profile, CSP Innovazione nelle ICT and Quartarete TV, which is now carrying the service that ostensibly allows “those with HD TV sets to watch 2D HDTV, even when the transmissions use 3D techniques.”

Sisvel said the backward-compatibility was possible “due to an innovative technique for formatting stereoscopic images, known as 3D Tile Format, which makes it possible to integrate two 720p frames within a single 1080p frame. The reconstructed right and left images maintain their original resolution, preventing an unbalancing of the vertical or horizontal resolution.”

The 3D Tile Format is said to improve the quality of the transmission of 3D hi-def content, compared to current solutions, i.e., side-by-side or top-and-bottom. The compatibility for regular 2D sets, allows broadcasters to transmit to both 2D and 3D users without having to double the amount of bandwidth required for transmissions.

“3D Tile Format technology introduces considerable benefits for the entire market,” said Sisvel Founder Roberto Dini. “The standardization bodies themselves are assessing the adoption of our system. It is worth emphasizing that this is a project which offers a positive image of the country, as the entire value chain of the technology, including the set-top-boxes for receiving the signal, has been developed and produced in Italy.” -- Deborah D. McAdams