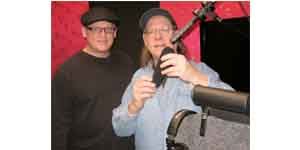 Paul Nelson and John Neff fit the BP4073 with a windscreen.

The show is shot on location in Portland, Ore., and local Sonic Media Studios is in charge of recording ADR.

Neff previously has used Audio-Technica microphones in location recording for David Lynch’s mystery film “Inland Empire,” and the BP4073 for other features and documentaries.

“We listened to three really great mics for our shotgun selection. The A-T was hands-down the winner in our test. It really did have more ‘presence’ than the others,” Neff said.

“I continue to choose A-T because, over the years, their products have proven time and time again to be completely reliable and have the ability to capture audio with the highest quality,” said Neff. “When you are in the field and have a set with actors and full crew, you can’t risk anything. Audio-Technica mics deliver every time.”