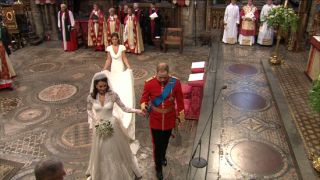 NEW YORK: There was that. The Royal Wedding, that is. Prince William of England and Kate Middleton took marriage vows last Friday in what were relatively wee hours in the United States. An estimated 22.8 million viewers in 18.6 million U.S. households nonetheless got up to watch the coverage, according to Nielsen numbers. Eleven U.S. networks carried coverage, including NBC.

Its news department created a handy-dandy graphic breakdown of who watched where and on what. Women outnumbered men about 2:1, 40.8 million tuned into NBC News for at least part of the broadcast, and 18 million videos of the nuptials were streamed on MSNBC.com.