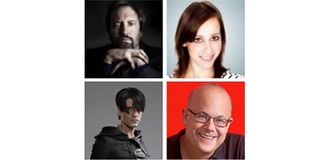 WASHINGTON—NewTek Presents: Broadcast Minds will return to NAB Show again in 2014. This year's session, moderated by Tom Green on April 9 in Las Vegas, will take a deep and entertaining look at how some of the top creators of digital content are forging new trails and drawing a profit online.

Each speaker will guide the audience through their approaches to creating programming built to live online. Attendees will gain knowledge of how these creators build, sustain and grow their audiences while monetizing their projects. NewTek will live stream the session at www.nabshow.com.

“As storytellers increasingly turn to the Internet to build and cultivate audiences on a global scale, it's no surprise that last year's Broadcast Minds discussion received such high marks from NAB Show attendees," said Philip Nelson, chief relationship officer at NewTek.

Criss Angel’s role as star, creator, executive producer and director of the A&E television series, “Criss Angel Mindfreak,” led him to launch his 2013 Spike TV show, “Criss Angel BeLIEve.” Additionally, he is the most watched magician in Internet history; his clips have generated more than 220 million views. In 2008, Angel partnered with Cirque du Soleil and MGM Resorts International to serve as writer, director, illusion designer and star of the live magic show, “Criss Angel BeLIEve,” which will continue through 2018.

Barnett is founder and CEO of My Damn Channel, an entertainment studio and content distributor. Since 2007, Barnett's team has built MyDamnChannel.com into a TV network where established and emerging talent from film, TV, the Internet, fans and advertisers create original programming. He has created content with communicators including Bill Clinton, Oprah Winfrey, the Rolling Stones, Jimmy Kimmel, Adam Carolla and Johnny Rotten. He was president of programming for CBS Radio and a senior production and programming executive at MTV and VH1 for over 11 years.

Green is perhaps best known for his unpredictable personality on MTV and his roles in films including “Road Trip” and “Freddy Got Fingered.” He has been featured on the cover of Rolling Stone, guest hosted on “The Late Show with David Letterman” and conquered the Web with his Internet talk show “Tom Green’s House Tonight.” Since its launch in 2013, the Tom Green Radio podcast has consistently been one of the most downloaded on iTunes.