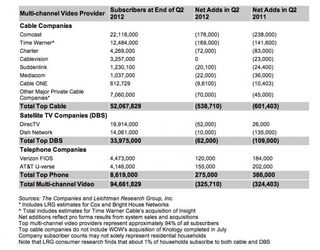 The thirteen largest multichannel video providers in the United States — representing about 94 percent of the market — lost about 325,000 net additional video subscribers in the second quarter of this year. The video subscription losses were about 1,500 more than in the same quarter a year ago.

“While reports of multi-channel video industry losses in the second quarter of 2012 have rekindled pronouncements of cord-cutting impacting the industry, the reality is that industry-wide losses in the traditionally weak quarter were nearly identical to losses in last year’s second quarter,” said Bruce Leichtman, president and principal analyst for Leichtman Research Group, Inc.

“Over the past year, multi-channel video providers added about 375,000 subscribers, compared to a gain of about 210,000 over the prior year.”