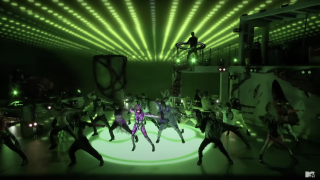 LONDON—XR Studios was tasked with managing the first example of a major awards show production during the COVID-19 pandemic with the MTV Video Music Awards. To handle this challenge, XR studio chose the disguise xR workflow to serve as the show’s central technology hub.

XR Studios created a virtual stage for the socially-distance telecast that was taking place in New York. This was showcased during the show with performances by Lady Gaga, The Black Eyed Peas and more in Extended Reality environments. Notch VFX helped create the virtual sets using disguise’s RenderStream video-over-IP protocol.

The disguise gx 2c media server powered real-time generated graphics from Notch onto the LED video screens as well as the virtual set extension content outside the LEDs through its camera calibration workflow.

“This was the largest and most complex xR show that we have had to support so far,” said Jamie Sunter, disguise senior support specialist. “We had support and development teams working in L.A. and U.K. to ensure that we could get the most coverage with both timezones. We utilized the newly built xR stage in London HQ to then be able to verify fixes and reproduce issues that were being seen on the site.”

The disguise software also assisted with color balance and overall compositing of real-time content tools for the VMAs.