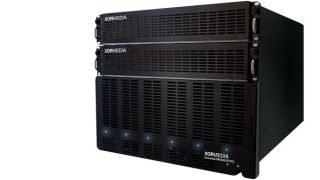 The broadcaster also experienced challenges in the complexity of having separate SD/HD servers and in repurposing content for new viewing platforms. MTV Oy needed to redesign its ingest, production and play-to-air architecture to keep up with new broadcasting demands.

XOR Media deployed the Universal MediaLibrary (UML) storage system, each of the two nodes with a capacity of 144TB, located at two sites 7km apart. One UML node serves as ingest/playout, while the other's role is production storage. The UMLs are mirrored to act as each other’s backup systems, in a simplified and fully redundant architecture.

Eight XOR MediaClient 8200 (MCL 8200) software codec servers are connected to both UMLs to support the 30-input and 42-output channel requirement, with HD playout and SD up conversion.