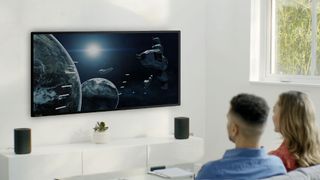 BOSTON—The latest study of consumer habits during the pandemic, and what may remain afterward, from Hub shows that 28% of consumers report having signed up for at least one new streaming service since February, before the pandemic began.

The big four streaming platforms—Netflix, Amazon Prime Video, Hulu and Disney+—all had at least a three point growth during that time frame in terms of percentage of consumers that say they subscribe to the service. Hulu saw the biggest growth (25% to 33%), followed by Amazon Prime Video (38% to 44%). Netflix and Disney both saw a three percentage point growth—from 60% to 63% for Netflix and 29% to 32%.

Hub identified three key reasons for why consumers turned to these services while sheltering at home: they offer exclusive shows, provide value for money and have a deep library of content.

Also, people are finding new content to watch through advertising and previews. As of October 2019, word of mouth/social was the biggest factor in people finding new content (31%), advertising drove 29% of respondents and previews was just 9%. But as of July, despite a dip, advertising has taken over as the biggest draw with 27% saying it leads them  to new TV shows. Previews saw an increase to 15%, while word of mouth has dropped to 25%.

The increase of viewing traditional broadcasts is another habit that will stick around for a number of consumers as well. Hub found 13% of respondents said they plan to continue to watch the same amount of broadcast news post-pandemic, and 12% plan to watch as much broadcast nets in general.