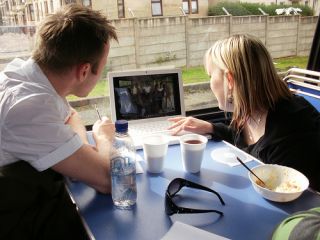 Media General has 18 TV stations in 10 states. It expects to roll out mobile DTV late in the third quarter of 2010 in its Tampa, Fla., and Columbus, Ohio, markets. Over the next 12 to 24 months, Media General plans to launch Mobile DTV in its eight additional markets.

“We will be ready to offer advertisers increased reach and frequency with a younger audience,” said Media General president and CEO, Marshall N. Morton. “We also expect mobile DTV will provide neighborhood businesses with geographically targeted advertising, based on the mobile user’s location.... We believe the potential for attracting new audiences and new revenues is significant.”

Mobile DTV was beta-launched last month in Washington, D.C. with a “Consumer Showcase,” to get devices into the hands of consumers. The Open Mobile Video

Coalition of broadcasters supplied select Sprint Mobile subscribers in the city with reception devices to try out. User reviews of the free service are not immediately available.

Media General is a member of the OMVC as well as the new Mobile Content Venture formed at the NAB Show in response to the FCC’s move to relieve broadcasters of spectrum. The industry has been working intently on mobile broadcasting for two years as a way to recapture revenues lost to platform fragmentation. The FCC is proposing to reallocate broadcast spectrum for nationwide wireless broadband, a move broadcasters fear will circumvent the effectiveness of mobile DTV. The service remains in the planning stage across most of the country even as the FCC hones the details of its reallocation plan.
-- Deborah D. McAdams

May 27, 2010: “Mobile DTV Runs Up Against Analog Tuner Requirement”
The FCC has agreed to consider waiving its dual-tuner requirement for mobile DTV devices.

May 11, 2010: “Mobile DTV Showcase Underway in D.C.”
The intent is to get receivers into the hands of a select group of individuals to draw attention to the free service.