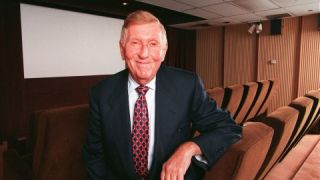 NEW YORK—Sumner Redstone, who built Viacom and eventually acquired CBS, passed away on Tuesday, Aug. 11. He was 97.

Redstone bought a controlling interest in Viacom in 1987, becoming its executive chairman of the board before taking over as CEO from 1996 to 2005. Viacom, with networks like Nickelodeon, MTV, Comedy Central and Showtime became a major player in the cable TV market. Redstone led Viacom through its acquisition of CBS in 2000. When he separated the two companies in 2005, Redstone maintained control of both as the executive chairman. Redstone eventually resigned his role with the companies after a court ordered he be examined by doctors as his health worsened.

In the last year, Viacom and CBS were once again merged into a single entity, ViacomCBS, under the guidance of Redstone’s daughter, Shari Redstone

Restone had a reputation in the industry for being combative, entering into many legal battles with companies and individuals.

Bob Bakish, president and CEO of ViacomCBS, said of Redstone: “Sumner Redstone was a brilliant visionary, operator and dealmaker, who single-handedly transformed a family-owned drive-in theater company into a global media portfolio. He was a force of nature and fierce competitor, who leaves behind a profound legacy in both business and philanthropy. ViacomCBS will remember Summer for his unparalleled passion to win, his endless intellectual curiosity and his complete dedication to the company. We extend our deepest sympathies to the Redstone family today.”