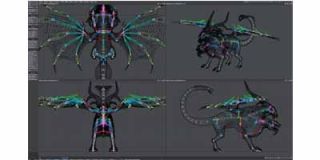 Burbank, CALIF. – The LightWave 3D Group, a division of NewTek, Inc., has introduced LightWave 11.5, the newest version of its 3D modeling, animation and rendering software for artists and designers.

“Leveraging the rich collection of new tools in LightWave 11.5 allows us to continue to deliver movies on time and on budget,” said Scott Wheeler, visual effects supervisor at Rogue State and LightWave beta team member. “No other software gives us the scalability to do small team projects while still being capable of handling major studio effects movies quite like LightWave. It’s a must have in our CG arsenal.”

Soft Body Bullet Dynamics includes dynamics for effects such as cloth, rubber, jelly or other deforming properties. Bullet meshes are also reactive to bone deformations and wind forces can be added for rippling effects.

Genoma Character Rigging System introduces a new modular instant-rigging system that can be used to quickly rig a biped or quadruped for animation in Modeler without the need for specialized tools. It offers modular rig presets that consist of skeletal parts, and complete rigs for biped and quadrupeds can also be customized.

LightWave 11.5 also expands its suite of virtual studio tools and adds support in the Viewport Preview Renderer for depth-of-field motion blur, node-edge rendering and stereoscopic 3D, as well as new functionality for Flocking and Instancing, as well as workflow enhancements.

LightWave has been used in the creation of films and TV shows, including “Skyfall,” “The Hunger Games,” “The Amazing Spider-Man,” “The Adventures of Tintin,” “Avatar,” The Walking Dead,” “Battlestar Galactica: Blood & Chrome,” “Fringe” and “CSI: Crime Scene Investigation.”