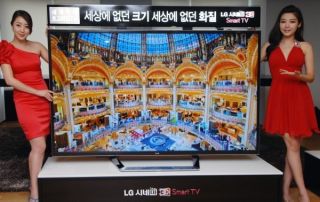 “A major step forward for the display industry, ultra-definition TV makes use of the screen real estate available with today's largest-size flat panels, much like the jump from 720p to 1080p years ago. The LG UD 84LM9600 is expected to be available in October at an MSRP of $19,999.99.”

LG made the announcement just a week after Sony announced its 4K ultra HDTV, to hit stores in December with a list price of $25,000. Like the Sony, the LG is 3D capable. The LG model will come with six pairs of shutter glasses, 3D depth control and 3D content access through its smart TV features. It sports integrated Wi-Fi capacity and cloud storage.

LG’s announcement notes that “no ‘ultra-definition’ or ‘4K’ content is currently available. No broadcast or other standard currently exists for 4K or ultra-definition television, and the 84LM9800 may or may not be compatible with such standards if and when developed.”

Sony has announced the debut of its first 4K TV, an LCD panel that delivers images at four times the resolution of full HD.