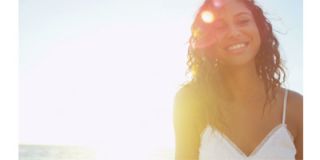 Of the millions of high-resolution stock photos, vectors and illustrations available from Shutterstock, many showcase the beauty of lens flares. This image of a woman celebrating the sunrise is from an HD video clip shot at 50 fps with a RED EPIC. Photo/video by Spotmatik/Shutterstock.

A walk through any film and video trade show will reveal dozens of companies selling matteboxes and lens hoods, products that keep extraneous light off of a camera lens. The lens flares that these devices prevent are optical malfunctions that occur when a powerful light source (sunlight, for example) strikes the lens and produces visible artifacts. This technical “mistake” may appear in the form of starbursts, rings or circles in a row, or as an all-encompassing haze that washes out the image. But carefully planned lens flares can be desirable, adding dramatic effect to the shot. The key is in knowing how to channel the power of light to your advantage.

1. Check focus and depth of field without extraneous flare-causing light entering the lens. The washed out effect of lens flares can make it difficult to focus and judge depth, so adjust the focus and DOF before you remove the lens hood or mattebox. (With the lens shielded, zoom in and check focus, then zoom back to the desired focal length and determine if the depth of field is appropriate.)

Depth of field is a function of both focal length and iris, which means that setting it in shots with lens flare can be tricky. Once the iris is set for the desired depth of field, don’t change it; adjust the exposure by adding or subtracting light via ND filters or modifying the camera’s ISO.

2. To ensure a beautiful glow, keep your subjects in the foreground and the sun or other flare-causing light source behind them. When arranged just so, the light will seem to envelop the subject before it hits the lens.

In this still from an HD video clip, two children dance on the beach at sunset. Photo/video by Ryan E. Walters/Shutterstock.

3. Add camera movement to the shot. The angle at which the flare-causing light source strikes the front element of the lens is what determines how the flare appears, so panning the camera during the shot will change the quality of the effect. Experimenting as you move with your subjects can lead to a range of stunning results.

4. Be creative when staging the shot. Just as a shot may include the subject entering or exiting the frame, shots may be designed with the appearance and disappearance of a lens flare. One way to accomplish this is by panning during the shot so the flare-causing light source suddenly strikes the front lens element, or the reverse. Another technique is to dolly the camera along a path where objects in the background will interrupt the flare-causing light source, so the flare will appear and disappear.

5. Let the zoom work for you. Zooming the lens with a flare-causing light source striking the front element will also alter the flare effect. Such zooming, when combined with panning or dolly camera movements, can produce a dramatic shot.

While filmmakers and videographers often go to great lengths to keep extraneous light off the camera lens, experimenting with lens flare can produce some surprising and pleasing results.