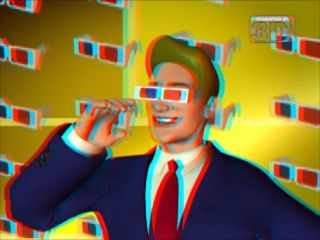 STANVILLE, KY.: This just in! Attorney commission’s 3D commercial! In a stunning development on a day nearly void of swiftly turnable news items, a Kentucky attorney has taken matters into his own hands by creating what he’s calling the “first 3D lawyer commercial.” One Eric C. Conn, of the Eric C. Conn Law Complex--1800-232-HURT--has a new Eric to the rescue spot in anaglyph 3D.

In addition to evangelizing Mr. Conn’s Social Security disability specialty, the animated avatar takes years off of his physical world visage. The spot also includes “an instructional demonstration by a young woman named Melinda Martin on how to make your own 3D glasses.”

It is not yet clear if the Eric C. Conn Law Firm 3D commercial has triggered dizziness or nausea among viewers.