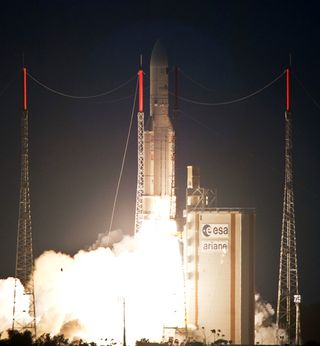 SEOUL: As 2010 came to an end, Korea Telecom (KT) saw the safe delivery of its Olleh 1 satellite to orbit. Part of the payload for Ariane Flight 199 from French Guiana, Olleh 1 will be used provide HD and 3D services to Korea.

The satellite entered a transfer orbit on Dec. 30 and is expected to be at its permanent orbital slot at 116 degrees east longitude by Jan. 9.

“With the successful launch of the Olleh 1 satellite we have laid the foundation for opening the satellite age covering the entire Korean peninsula,” said Kim Seong-man , vice president of KT’s Network Sector. “We will continuously improve satellite technology service quality in order to take off as a top tier global satellite service provider by having four artificial satellites.”

Olleh 1, which is expected to have a 15-year lifespan, will replace Koreasat 3. KT also has in orbit Koreasat 5 and the Kondor satellite. The satellite provides direct broadcast system relays, CATV distribution and VSAT multimedia services, and it was designed to support HD and 3D satellite services. It is expected to be fully operational by early February. -- from TV Technology