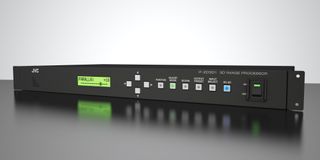 JVC rolled out a 3D image process this week just as news about the format burgeons with the opening of the Consumer Electronics Show. JVC’s IF-2D3D1 Stereoscopic Image Processor works as a 2D-to-3D converter and as a 3D left/right mixer. It allows 3D footage captured on paired cameras to be viewed immediately in 3D, on location, on a 3D capable monitor.

The 1RU-sized processor is compatible with a range of HD formats, and using proprietary JVC algorithms, handles 2D-to-3D conversion in four mixed formats for stereo video output. Those include line-by-line, side-by-side-half, above-below and checkerboard. The IF-2D3D1 can also output discrete left and right signals via HD-SDI or HDMI for dual projection or editing. Output can be adjusted for parallax--image displacement--and 3D intensity, both with natural, anaglyph, and sequential viewing modes.