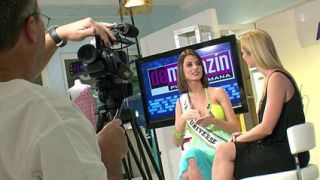 WAYNE, N.J.: JVC camcorders are being used extensively to document most of the appearances and speaking engagements of Miss Universe during her estimated 250,000 miles of travel each year.

The GY-HM100U ProHD model camcorder was chosen by the Miss Universe Organization for its balance of image quality, portability, durability and ease of use, along with the advantages of a file-based workflow.

“The raw image that it produces is very good,” said Colin Hornett, director of Digital Multimedia at the Miss Universe Organization, in a press release. “I’m absolutely delighted with what we’ve been able to do with them.”

Footage is recorded into SDHC cards and moved to a separate hard drive until it can be secured on servers at the organization’s facilities.

“The workflow of these cameras is fantastic,” said Hornett. “There’s no conversion – you shoot, then you edit. It lets you make the most of your editing time.”