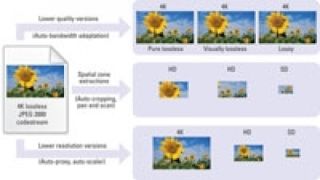 Today's broadcasters are looking for the highest image quality, flexible delivery formats, interoperability and standardized profiles for interactive video transport and workflows. They also have a vested interest in a common high-end format to archive, preserve and monetize the avalanche of video footage generated globally.

This is the story behind the rapid adoption of JPEG 2000 compression in the contribution chain. Standardized broadcast profiles were adopted in 2010 to match current industry needs (JPEG 2000 Part 1 Amendment 3 — Profiles for Broadcast Application — ISO/IEC 15444-1:2004/Amd3), ensuring this wavelet-based codec's benchmark position in contribution.

In parallel, these broadcast profiles have also filled the industrywide need for compression standards to archive and create mezzanine formats, allowing transcoding to a variety of media distribution channels. The ongoing standardization process of the Interoperable Master Format (IMF) by SMPTE based on JPEG 2000 profiles brings the adoption full-circle.

The U.S. Library of Congress, the French Institut National de l'Audiovisuel (INA) and several Hollywood studios have selected the codec for the long-term preservation of a century of audio-visual contents.

JPEG 2000 is different from other video codecs. MPEG and other DCT-based codecs have been designed to optimize the compression efficiency to deliver video to viewers via a pipe with limited bandwidth. JPEG 2000, with its wavelet transform algorithm, brings features not only for image compression efficiency, but to give also the user better control and flexibility throughout the image processing chain. The codec provides unique features that are not available in any other compression method.

JPEG 2000 under the spotlight

JPEG 2000 is based on the discrete wavelet transform (DWT) and uses scalar quantization, context modeling, arithmetic coding and post-compression rate allocation. JPEG 2000 provides random access (i.e. involving a minimal decoding) to the block level in each sub-band, thus making it possible to decode a region, a low-resolution or a low-quality image version of the image without having to decode it as a whole.

In video applications, JPEG 2000 is used as an intraframe codec, so it closely matches the production workflow in which each frame of a video is treated as a single unit. In Hollywood, its ability to compress frame by frame has made this technology popular for digital intermediate coding. If the purpose of compression is the distribution of essence and no further editing is expected, long-GOP MPEG is typically preferred.

Post-production workflows consist of several encoding/decoding cycles. JPEG 2000 preserves the highest quality throughout this process, and no blocking artifacts are created. Moreover, the technology supports all common bit depths whether 8, 10, 12 bits or higher.

JPEG 2000 enables images to be compressed in lossy and visually or mathematically lossless modes for various applications. (See Figure 2.) Additionally, its scalability allows a “create once, use many times” approach to service a wide range of user platforms.

The technology also enables improved editing: Even at the highest bit rates, its intrinsic flexibility makes it user-friendly on laptop and workstation editing systems, with a limited number of full bit rate real-time video tracks. Improving computing hardware is certain to increase the number of real-time layers.

Since JPEG 2000 is an intraframe codec, this prevents error propagation over multiple frames and allows the video signal to be cut at any point for editing or other purposes.

Easy transcoding appeals to high-end applications where workflows vastly benefit from transcoding to an intermediate version. JPEG 2000 ensures a clean and quick operation when bit rate is at a premium. Professional viewers have labeled correctly transcoded 1080p JPEG 2000 files compressed at 100Mb/s as “visually identical” to the original 2K footage. Furthermore, the wavelet-based JPEG 2000 compression does not interfere with the final — usually DCT-based — broadcast formats.

Last but not least, several standards specify in detail how the JPEG 2000 video stream should be encapsulated in a number of widely adopted containers such as MXF or MPEG-2 TS.

Also, similar to the contribution, the low latency of JPEG 2000 is something that would be practically impossible for wireless systems using an MPEG system based on long GOP coding.

The broadcasters and video archivists are looking for long-term digital preservation on disk. In most cases, the source material is not digital, but film that needs to be scanned or high-quality analog videotape. As such, a destination digital format must then be selected.

Key requirements often include reducing the storage costs of uncompressed video while still maintaining indefinite protection from loss or damage. Moreover, the format should preferably enable digitized content to be exploited, which means providing flexibility — workflows again — and security. For these reasons, several studies and user reports claim JPEG 2000 to be the codec for audio-visual archiving.

Several initiatives are pushing the industry beyond today's HD: NHK Super Hi-Vision, also known as 8K and UHDTV, the Higher Frame Rates in Cinema initiative by James Cameron and Peter Jackson (up to 120fps), 16-bit color depth, and the numerous manufacturers that are now offering 4K technology.

The need for efficient codecs has gained significant attraction amongst the industry. The future of JPEG 2000 is bright as it is an open standard that requires less power, consumes less space in hardware implementations and generally delivers greater scalability, flexibility and visual quality than other codecs. An increasing number of manufacturers, broadcasters and producers are using JPEG 2000 implementations to adapt today's industry to these new challenges.

Jean-Baptiste Lorent and François Macé are product managers at intoPIX.