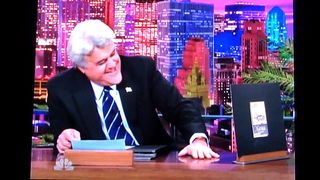 ALVISO, CALIF: About half the audience is time-shifting ���The Jay Leno Show” two weeks into its new prime-time slot, an improvement for the period, according to TiVo. The digital video recording firm, said that on average, 46 percent of “Jay” viewers opted to record the show and watch it later, based on the service’s subscriber numbers.

“This represents an improvement over an average 70 percent of time-shifted viewing that NBC programs experienced last season during the 10 p.m. hour, and has resulted in less time-shifting for NBC thus far this season at 10 p.m. when compared with other broadcast networks,” TiVo said.

However, according to TiVo’s StopWatch ratings, nearly 20 percent Jay-shifters started watching the show while it was in progress, up 13 percent from last season, “further slicing into NBC’s 11 p.m. skein, “The Tonight Show with Conan O’Brien.”

“Depending on who you ask, NBC’s glass is either half full or half empty,” said Todd Juenger, vice president and general manager of TiVo Audience Research and Measurement. “While Leno is succeeding in reducing the amount of time-shifted viewing for NBC’s 10 p.m. timeslot, he certainly isn’t TiVo-proof, as nearly 50 percent of viewing is still time-shifted. Moreover, those time-shifted viewers are nearly twice as likely to watch within one hour, displacing NBC’s 11pm timeslot.”