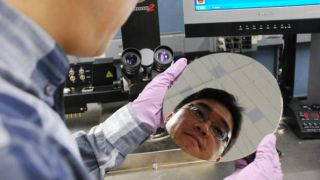 Scientists at IBM have created an alternative to silicon for the logic gates on microchips that will ensure the continuing shrinkage of the basic digital switching mechanism for at least 10 more years.

The IBM breakthrough, first reported in Nature Nanotechnology and by the New York Times, uses carbon nanotubes, a type of molecule that is an alternative to silicon, for the creation of miniature logic gates in microprocessors.

Researchers at IBM’s T.J. Watson Research Center in Yorktown Heights, NY, have created a pattern of carbon nanotubes on the surface of a silicon wafer. The nanotubes used to manufacture the processors, the report said, are hybrids of silicon and carbon nanotubes with more than 10,000 working transistors.

Basically, carbon nanotubes are single sheets of carbon rolled into a cylindrical shape. In the Nature Nanotechnology paper, the IBM researchers described how they were able to place ultra-small rectangles of the material in regular arrays by placing them in a soapy mixture that makes them soluble in water.

The scientists used a process described as “chemical self-assembly” to create the patterned array in which the nanotubes stick in some areas of the surface while other areas are left untouched. That development allows them to arrange the nanotubes 100 times more densely than earlier methods, an essential step in economical chip manufacturing.

The breakthrough almost ensures the continuation of Moore’s Law, an observation named after Intel founder Gordon Moore. In 1965, Moore noted that over the history of computing the number of transistors on integrated circuits doubles about every two years.

To keep up this progression, engineers have had to race to perfect various manufacturing systems and materials that continue to perform on an ever smaller scale. Recently, however, there has been growing doubt that Moore Law could continue at the rate once predicted.

This is what makes the IBM breakthrough so significant, the Times reported scentists as saying, because it offers a way for the growth to continue.

“This is terrific. I’m really excited about this,” Subhasish Mitra, a Stanford University electrical engineering professor who specializes in carbon nanotube materials, told the newspaper. The promise of the new material, he said, is that not only will carbon nanotubes allow chip makers to build smaller transistors, but it is likely they will turn off and on more quickly as well.

The performance of microprocessors, measured as “clock speed,” has largely remained the stagnant in recent years. This stagnation, the Times reported, has forced the computer industry to change its design and begin building more parallel computers. Today processors have multiple “cores,” which are used to break up tasks so they can be processed simultaneously.

IBM said that once carbon nanotube technology is perfected by the end of the decade it will be able to dramatically increase the speed of processing, as well as decrease the number of transistors needed.

Perfecting the manufacturing process will require more refined carbon nanotube material, at least 99.99 percent pure. A IBM researcher told the Times that his group is optimistic because Bell Labs scientists figured out ways to purify germanium, a metal chemically similar to silicon, in the 1940s to make the first transistors.