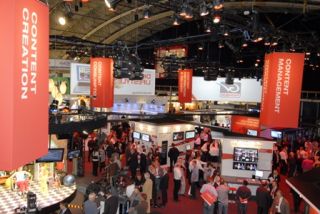 AMSTERDAM: Every year, broadcasting multitudes around the world commune and celebrate at the International Broadcasting Convention (IBC) in Amsterdam, held this year on Sept. 6-11. More than 50,000 are expected to attend IBC2012, participating in sessions, exchanging information and walking the exhibition aisles.

The event formally gets underway Friday, Sept. 7 at 1 p.m. with a joint keynote presentation by entertainer will.i.am and Intel vice president of sales and marketing, Johan Jervøe. The keynote is expected to focus on how technology enriches our lives, with a special emphasis on advocating STEM (science, technology, engineering and mathematics) education.

“I’m always thinking about tomorrow,” will.i.am said. “Technology allows us to amplify our ideas, amplify our creativity, and find new ways of solving our problems and genuinely start living in those future tomorrows, and that’s what I want to share at IBC.”

Held at the Amsterdam RAI conference center, IBC2012 will feature the unveiling of many new products and technology announcements. As nations around the world begin requiring audio monitoring, logging and level compliance by broadcasters, several companies will show products addressing those needs.

Digital Nirvana, for example, will debut updates to its Monitor IQ that provides centralized management, automatic ad detection, a director’s audio track, as well as an advanced metadata harvester.

“After the enthusiastic reception we received to our new features and products in April at the NAB convention and the Broadcast Asia show last month, we’re excited to bring our latest [technology] to IBC,” said Ned Chini, vice president of sales and marketing, Digital Nirvana.

SOCIAL NETWORKS
Another active area for development is the integration of social network messaging into broadcasts. Vizrt plans to introduce multiple products to make it easy to deal with social networks in an on-air setting, including including Facebook, Twitter and YouTube, using the company’s Viz Virtual Studio product. Also new at IBC will be a Vizrt Skype Interface that lets the newsroom and production staff connect to Skype calls directly from within Viz newsroom systems.

One of the continuing issues broadcasters face is the proliferation of networks over which their signals need to feed. Now that video has splintered into formats for IP, satellite, fiber and microwave transmission (among others), there are an increasing number of situations where various networks must be connected through an interface.

Sony will be at IBC2012 with its full range of products. The company expects to feature its 4K systems, for which it has a complete workflow from camera to display.

“By working in close collaboration with partners and customers and listening to their feedback, we are uniquely placed to develop entirely new technology platforms for the industry,” said Olivier Bovis, head of AV media for Sony Europe.

JVC will mark the European debut of its ProHD ENG GY-HM600 and GY-HM650 handheld camcorders, targeted at news and other rapid-turnaround professional applications. JVC will also show the new GY-HMQ10 4K camcorder which launched at CES in January.

Harris plans to feature a number of its products and systems, including the HView SX Pro multiviewer, Magellan network monitoring system and its mobile production truck systems. Also featured in the Harris booth will be the latest version of the company’s Nexio Studio Suite software, which provides enhanced control of recording and playback for Nexio video servers.

Miranda will unveil its Intelligent Automatic Loudness Correction (ALC), a loudness solution that includes monitoring, logging and correction using real-time processing during playout. Intelligent ALC uses information fed from a broadcaster’s traffic system to identify whether content has been corrected already, thereby avoiding tampering with audio that has already been through loudness correction.

THE SECOND SCREEN
Snell will spotlight its TV Everywhere initiative, which targets content delivered to a variety of “second-screen devices” that include smartphones, tablets, the web and computers. With broadcasters’ need to create and deliver content in multiple formats, Snell will show off the TV Everywhere capability of products such as ICE, Morpheus, and Momentum.

Grass Valley will introduce enhancements to its portfolio of cameras, slow-motion replay systems, production switchers, media servers, networked storage and routing switchers. Some of the company’s technology that will debut at the show are the latest version of its Stratus media workflow application and a new systemized version of its Edius editing platform, called Edius Elite.

“We’re hearing from our customers that real value and flexibility are most important in the new products we offer, so that’s what you’ll see across all of our product lines at IBC,” said Jeff Rosica, executive vice president of Grass Valley.

Evertz will introduce the 3480STX, an adaptive bit rate transcoder for multiscreen delivery. The 3480STX is targeted for the growing overthe- top (OTT) market for delivering content to mobile and Webbased devices.

The T-VIPS CP524 TS adapter, to be unveiled at IBC, can convert among up to four transport streams that use the ASI, IP, SONET/SDH and SMPTE 310 standards.

“The CP524 transport stream adapter provides a single-box solution that takes the pain out of remultiplexing and filtering, and mixing and matching services from multiple inputs to multiple outputs,” said Johnny Dolvik, CEO of T-VIPS. “Since it’s a single unit, it reduces running costs and space requirements, too.”

Rohde & Schwarz will present v5.0 of its DVS Clipster DI workstation. With processing speeds that are eight times faster than the previous version, the company says that the latest version is especially capable for 3D post-production work.

For those in the field, Sachtler will roll out a new fluid pan and tilt head and six tripods at the show. The head features a 75mm ball mount and can carry dSLRs and small cameras up to 13 pounds (6 kg). Supporting the new head are two new carbon fiber tripods— four other tripods will have 100mm and 150mm ball sockets, suitable for studio and field production requirements.

These are just a sample of the products and technologies that will debut at IBC2012. Although many of the products shown at the show have an international orientation, the state of the industry today is such that it’s far easier to share content across borders than it has ever been. In other words, what gets played there also gets played here, often at the same time and at the same quality.

IBC2012 presents the second of the onetwo broadcast show punches, with the first being at NAB in April. Products that were rumored in April will now face the scrutiny of real users and customers. And IBC2012 will be the place to catch the first whispers of what will be shown at NAB in 2013.

With so many companies developing products for a diverging video industry, IBC promises to pack a lot into its six days. For more information on the show, visit www.ibc.org.