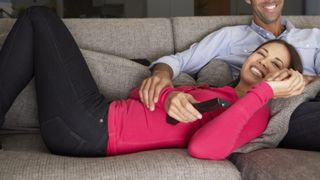 BOSTON—When viewers want to find something to watch, half of them will check what’s on streaming before traditional pay-TV options, according to a new study from Hub Entertainment Research.

Hub’s “2020 Decoding the Default” study sought to find out the preferences of today’s TV viewers, and while pay-TV is hanging on, streaming is well positioned to become the new standard-bearer for what people talk about when they ask “what’s on TV?”

In terms of overall viewing, 60% of viewers say that an online source consumes most of their viewing time over a pay-TV service. That was closer to an even split last year (52% for online, 48% for MVPD).

While nearly two-thirds of respondents (64%) say they have both a traditional pay-TV service and a subscription to at least one streamer, the percentage of people who only have one or the other is now equal at 18%. The change from 2019 actually saw an increase in respondents who only had the one service—from 17% to 18% for pay-TV, 14% to 18% for streamers and down from 69% to 64% for both.

In addition, 50% of respondents subscribe to two or more of the “Big 4” streaming services—Netflix, Hulu, Amazon Prime Video and Disney+—10% subscribe to all of them.

When it comes to which service respondents said they would choose if they could only have one, live pay-TV still sits at the top with 35%, but Netflix trails right behind it at 32%.

For more information on the “2020 Decoding the Default” study, visit Hub’s website.