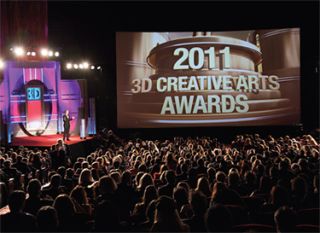 HOLLYWOOD—On Feb. it was a celebration of all things 3D when the International 3D Society (I3DS) staged the first ever major Hollywood awards show shot completely in 3D to honor the current state of stereographic production in 3D movies, television, advertising and video games.

Jim Chabin, president of the I3DS and former president of the Academy of Television Arts & Sciences, was executive producer of the show along with Steve Schklair, CEO of 3ality Digital and Gina Tanner, CEO of Digital Revolution Studios.

Chabin regards this first 3D awards show as a triumph of both creativity and technology. "This show is evidence that live 3D production has come of age," he said, "Even though this is a Creative Arts event, our people work hand in hand with their technology partners. We're at a stage now where 3D production has to be a team effort both in front of and behind the cameras."

The show's producer, Ted Kenney, said he had to look at everything from set design to camera placement with 3D in mind.

"In 3D, you want the audience to feel as if they were present at the event," Kenney said. "For example if we are shooting the host on the red carpet we creatively decided to stay on that shot longer in 3D than in 2D to let the viewers feel they are part of the moment. We can even change the convergence of the left/right eyes by giving it additional negative parallax to create the impression the host is coming out of the screen."

Everything about this production was groundbreaking, from the lenticular 3D Red Carpet designed by Create Advertising for the celebrities's flashbulb-popping entrance to the two 3D production trucks provided by Touring Video of Burbank, CA. One truck, the TV-3 43foot Expando, was used by the show's director, Paul D. Miller, as a control room where the production was recorded by TD Gene Crowe onto two Abekas Mira direct-to-disk systems as 8 stereoscopic channels in 60i. The other truck housed stereographer Nick Brown with all the camera convergence operators and their equipment.

Director Miller had five beam-splitter 3D camera rigs to work with, four supplied by 3ality Digital holding pairs of Sony HDC-1500 cameras and one handheld rig holding Sony HDC-P1 block cameras. For the red carpet entrance, he would have access to a Jimmy Jib crane and a SteadyCam rig, each holding Canon HD XF-305 cameras that came from Digital Revolution Studios.

To optimize the impact of the 3D, Miller equipped his camera rigs shooting the two stages inside the theater with wide angle lenses and positioned them closer to the presenters than he normally would have on a 2D awards show.

But inside the main production truck, he also had to deal with the requirement of wearing special glasses to evaluate his 3D shots. So he arranged for the right hand side large LCD screen to display in 2D so he could evaluate shot compositions and keep his 3D glasses handy to see the final 3D imagery on the left side screen.

A steadicam operator captures 3D on the red carpet. Miller also faced the reality that the 3D clips shown to the audience would only record in 2D when shot with stereoscopic cameras. So all those clips would have to be replaced during post production at Digital Revolution Studios.

"All of these techniques are still evolving," Miller said. "For example, we could not tie the Steady Cam's 3D camera rig directly into the production truck so that crew had to carry their own recorder with them on set."

The Lumiere Award winners in the 3D Creative Awards' 15 categories had been voted on by the Society's 400 members. This year they included Disney's "Tron" for live-action 3D feature of the year, DreamWorks Animation's "How to Train Your Dragon" as best animated 3D feature, and "Black Eyed Peas 3D: Live" as the best live 3D event. The Walt Disney Studios won the People's Choice Award for "Toy Story 3" based on online voting for favorite 3D animated movie.

A highpoint of the evening was the presentation of a Lifetime Achievement Award to 3D pioneer, Lenny Lipton, by Jon Landau, the executive producer of both "Titanic" and "Avatar". Landau also accepted the inaugural Harold Lloyd Award for outstanding achievement in 3D filmmaking that was bestowed upon James Cameron.

Cameron was on location shooting his latest 3D production, but on his behalf Landau told the audience, "Jim looks forward to doing every project in the future in 3D."