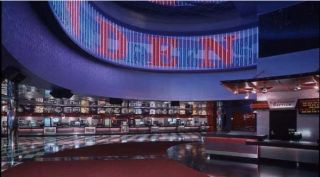 LAS VEGAS: Harmonic conjured tradition to make a point about the modern video business. The company used a movie theater, complete with popcorn and candy, to illustrate how it’s responding to a video marketplace comprising millions of tiny screens. Its 2011 NAB Show presser was held Saturday night in the Palms Resort’s Brendan Theater.

“The company involved is in everything from HD to iPad delivery,” said Dr. Patrick Harshman, president and CEO of Harmonic.

Executives emphasized how last year’s marriage of Harmonic and Omneon created a company that now serves content and programming service providers. I.e., cable and broadcast networks are big on Omneon video servers, while DirecTV, Dish, Comcast, Sky, Canal+ and others are long-time Harmonic clients. Technology from previous acquisitions—Divicom, Entone, Rhozet and Scopus—place Harmonic’s products all along the content management and distribution chain. The outcome was a banner year—record revenues of $500 million for 2010.

Harmonic didn’t start out so gloriously. Anthony Ley, the former chief executive who helped get the company off the ground, said they couldn’t get backing in 1988.

A first round of $5 million was finally secured in 1989. The company generated revenues of $3 million. The next year, revenues doubled. Year No. 3 saw $18 million in revenues. In four years, revenues reached $39 million. The product line was complete by 1995. Harmonic went public and acquired Divicom.

“The bubble broke just as we signed the deal,” Ley said. “The market fell apart. It was a difficult period for us.“

Times in general remain difficult, but the House of Harmonic is well-positioned in terms of diversification, both inside and out. More than half of its business is international; U.S. sales comprise 46 percent of the total. Divisionally, 46 percent of the business is video processing; 22 percent is edge and access; 20 percent is production and playout; 13 percent, services. Across the video distribution landscape, 47 percent of Harmonic’s business is with cable; 21 percent, satellite and telcoTV; and 32 percent, broadcast and media. The company is said to invest some $100 million a year in research and development.

One big question hanging over every technology company of late is the impact of events in Japan. The nation is a global supplier of integrated circuit chips and electronic components. Production there was disrupted and remains affected by the mid-March earthquake and tsunami. Geoff Stedman, senior vice president of marketing for Harmonic, said the company has a substantial inventory of chips and expects no significant shortages of components from Japan. There may be a slowdown from Japanese firms that buy from Harmonic, but any delayed business is expected to rebound as the country recovers.

This year’s NAB Show marks the first event at which Harmonic and Omneon are appearing as combined companies. But will have individual booths at the show because of the timing of reserving booth space. (See the company’s 2011 NAB Show featured gear at “Harmonic in a Nutshell.”)