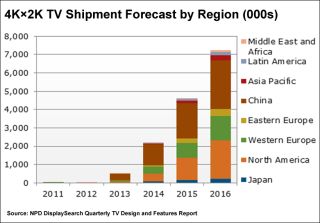 This year, more than 500,000 Ultra HD televisions will ship worldwide, and by 2016, shipments will grow to more than 7 million, according to a new report from NPD DisplaySearch.

The report, “Quarterly TV Design and Features Report,” the display industry is moving ahead with the launch of more 4K x 2K screen sizes and to increase production volumes. Among the manufacturers pushing ahead with production of 4K x 2K televisions are Sony, LG, Samsung and Sharp. Six leading Chinese brands and value-oriented brand, such as Vizio and Funai, are also advancing on the 4K x 2K front, the report says.

“Panel makers are producing 4K x 2K screen sizes ranging from 50in-110in, and there is also a push to increase TV content,” says Paul Gray, Director of TV Electronics Research for NPD DisplaySearch. “The availability of content is key to consumer adoption of 4K x 2K TVs, and TV manufacturers are anxious to prevent any potential delays that could stall adoption, as was the case with 3-DTVs.”

According to NPD DisplaySearch, China is projected to lead in demand for 4K x 2K TVs with shipments forecast to grow from 333,000 this year to more than 2.6 million in 2016. North America will follow, with just more than 2 million forecast to ship in 2016, the display market authority predicts

China, Japan and Western Europe will witness the highest adoption of 4K x 2K because these markets normally prefer that latest highly featured products, says Gray. Consumers in North America, however, generally postpone purchases of new technology until prices drop, he says. “However, because demand is heavily skewed towards large screen in this market, there is a significant opportunity,” adds Gray.