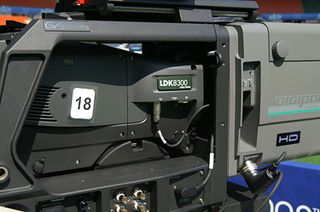 LDK 8300 Super SloMo The German broadcasting company acquired the cameras along with two LDK 8000 Elite wireless cameras, a K2 Dyno replay system and a K2 Summit media server to round out their equipment portfolio.

The Super SloMo camera is capable of producing full-res HD images at 1X, 2X or 3X normal frame rates. It can also perform as a standard speed camera.

The 8000 Elite wireless model reportedly use the same front end as 8000 wired models and the slow motion 8300 brethren, providing the same image quality and enabling directors to cut between feeds without losing appearance value.

The K2 Dyno and Summit hardware are said to give users an intuitive way to identify and cue clips for replay while setting playback speed.

“The K2 Dyno and K2 Summit combination…forms a powerful and very cost-effective combination with the LDK 8300 Super SloMo camera,” said Dirk Bubley, Grass Valley Key Account manager for ZDF, in a press release. “The combined K2 Dyno Replay System performed flawlessly at Garmisch-Partenkirchen. Everyone was delighted with the quality of the coverage.”