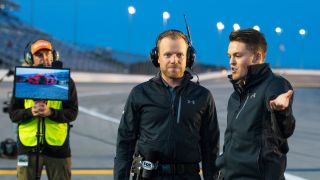 Fox Sports pit reporter Regan Smith will be on-site at Darlington, but coverage will be different as social distancing guidelines are instituted. (Image credit: Fox Sports)

DARLINGTON, S.C.—NASCAR will be one of the first professional leagues to return with live competition following the outbreak of coronavirus in March. With a series of seven races over 11 days between two locations, Fox Sports has been tasked with bringing back the thrill of race day to fans while keeping both its production crew and NASCAR team members safe from the potential spread of COVID-19.

The NASCAR season will get rolling again with the Darlington 400 at the Darlington Raceway in South Carolina on May 17, airing of Fox (additional races will be aired on FS1). Michael Davies, senior vice president of technical operations for Fox Sports, spoke with TV Technology about how the broadcast crew will meet the demands of the production while staying safe

It all begins with something that was put in place even before COVID-19. The connectivity installed at racetracks—which was added just a few years ago with help from AT&T, according to Davies—enables crew at the track to communicate with others off-site.

“We have an immense amount of bandwidth that we’re able to share with NASCAR to be able to connect those sites,” said Davies. “We are able to leverage that technology to look and work a little bit differently.”

A number of crew members will be working remotely for these races, including the announcers. Those working remotely were able to get some practice over the past two months with “iRacing,” virtual races that NASCAR organized and broadcast, something that made the production crew more comfortable with the new reality, said Davies.

There will still be a good number of crew members at the track on race day, albeit slimmed down. Davies described mobile production units as the “antithesis of social distancing,” and as a result will have a limited number of crew operating from within on race day. There will also be fewer crew members covering the pit areas, as NASCAR has adapted how race teams handle pit stops.

Still, Davies expects the look of the race to be similar for those watching on TV, as most of the main camera positions will be in place, as well as in-car cameras. There may even be an advantage to the fact that these races will be held without any fans in the stands.

“I’m looking forward to see how we can use the entire racetrack, whereas before we had to work around, obviously, a very large audience,” Davies said. “That could be one of the interesting side effects of things not only in NASCAR but other sports as well, where you might actually have places where you couldn’t put cameras and now you can.”

Of course, there are extra safety precautions that need to be taken to try and prevent the spread of the virus. In pre-COVID days, a lot of equipment would be shared among crew members, something that is not advisable in this current environment. The solution was easy when it came to headsets—everyone got their own—but for cameras and other equipment, Davies said they will be relying on UVC robots that can sterilize the equipment between uses. Mobile units will also have a specific cleaning regimen.

Fox Sports is also attempting to minimize its footprint, as well as its ease of operation, by using the same crew and equipment for all of the scheduled races, driving the mobile units from Darlington to Charlotte, N.C.

“The problem with NASCAR is it’s a pretty purpose-built kind of deal, so if you were to use different facilities and what not, what you would gain in potentially in a little less driving you would lose again in how much and how many people it would take to set up,” Davies explained.

At this time, NASCAR has not announced any additional races beyond May 27, but Davies does share that there are plans to continue the season after that date. As the season progresses, Davies expects that Fox Sports’ broadcast procedures will evolve as well.

“Safe be said, we’re looking to learn from this first one, and we know the production is going to evolve,” Davies said. “I’ve just encouraged everybody to be agile and that unlike a lot of other things where you can just say, ‘alright, this is what we’re going to do for the entire season,’ we just need to be ever vigilant on change.

“And with a dynamic situation like this, it’s important to have your eyes open in terms of better ways of doing things as technology grows, as the response and ability to do different things grows,” Davies added. “While I’m really happy where we are starting out, I have no doubt that things will evolve as we move forward.”