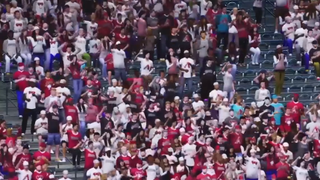 LOS ANGELES—Fox Sports believes that its broadcast of Major League Baseball games for the new season actually won’t look as different as many might have expected with the fact that fans will not be allowed to attend games. This will be thanks to the network adding virtual fans.

Fox Sports will implement virtual fans, based on advanced motion capture, into the stands for its game broadcasts starting Saturday, July 25. Fox says that these CGI fans feature more than 500 looping actions and are customizable, with the network able to control the excitement level of the crowd and the balance of the fans for the two teams.

According to a report from Variety, MLB is supporting the effort by providing 75 different sound effects from the audio files of a MLB-sanctioned video game from Sony.

A preview of the technology was given to the New York Post, with Fox Sports Executive Vice President Brad Zager saying: “We were dead set on trying to make the broadcast with no crowd feel as authentic and organic as possible. We want to give people an escape.”

No fans? Not on FOX Sports. Thousands of virtual fans will attend FOX’s MLB games this Saturday. pic.twitter.com/z9oQU0rYuCJuly 23, 2020

Fox is broadcasting four games on July 25, all of which will feature virtual fans. This will include games at Wrigley Field in Chicago, Dodger Stadium in Los Angeles, Petco Park in San Diego and Nationals Park in D.C.