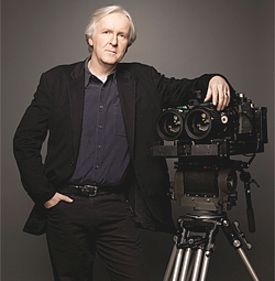 At the 2011 NAB Opening keynote session, filmmaker James Cameron called on broadcasters to embrace the possibilities inherent in stereoscopic technologies, while announcing plans with 3D producer Vince Pace to form a new firm devoted solely to supporting the development of 3D programming across film and broadcast.

James Cameron The newly formed CAMERON–PACE Group will have its eye on building 3D camera systems and accelerating the acceptance of 3D programming across film, live television, sports and education. Following in the footsteps of the 3D technology that the two co-founders collectively built, including the FUSION 3D system, the new company will be focused on creating both technology and processes that will allow for the ubiquitous acceptance of 3D.

“We realized that broadcast is the future of 3D,” said Cameron, whose film “Avatar” was shot in 3D in 2009. “And [we started to think about] how it might impact [the broadcast] business going forward.”

One factor that has limited the mass acceptance of 3D is the realization that the process of making stereoscopic programming didn’t fit the traditional 2D model, Cameron said. And that was a problem.

Creating programming for 3D had to be “just as good as a 2D production,” he said. “One of the myths about barriers to entry into the world of 3D is that you have to start over from scratch. But it’s exactly the opposite.”

In other words, to grow the acceptance of 3D, content creators must shoot in 3D with the same expert cameramen and rely on the same talented production personnel that work on 2D programming, but with ancillary assistance from 3D experts on the side. By beginning to take advantage of the personnel and expertise afforded 2D productions – in one example, by piggybacking 3D cameras and control technology atop 2D cameras – 3D will begin to find an even wider market.

“For broadcasters, the foundation of what you’ve currently done will translate well to 3D, and you’ll take it even further from there,” Pace said.