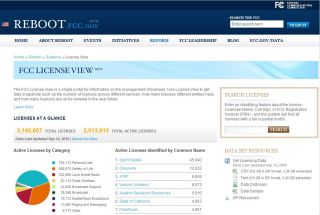 “This consolidated portal allows users of FCC License View to access information on the number of different licenses across services, the number of licenses owned by particular entities, and how many licenses are up for renewal in the future,” the FCC said in announcing the database.

“This data innovation is a key step toward opening the agency and its resources to the public,” FCC Chairman Julius Genachowski said in the announcement. “With the launch of FCC License View, the agency has made a bold stride towards unlocking the complex--but significant--world of FCC license management data.”

The License View dataset is composed of data from the FCC’s five licensing databases, and gives users three formats for usage--HTML, raw files and APIs. The launch follows the FCC’s recent release of its License View API, part of a package of developer community tools announced by Genachowski and Managing Director Steven VanRoekel at the Gov 2.0 Summit in Washington, D.C. Sept. 7.

The database is accessible at FCC License View.