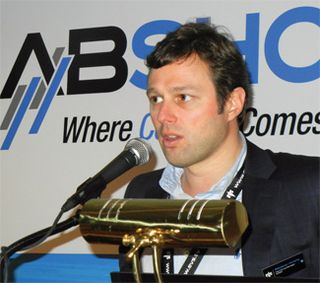 Sebastien Verlaine, marketing manager for EVS, explains the new IPEdit.3D, a 3D live editing solution.
EVS came to the NAB Show promising to increase the speed of production. Pointing out that the company is more than just servers, Nicolas Bourdon, marketing and communications director for EVS, said that partnerships with customers have led the company into new areas.

The XT3 can handle up to eight SD/HD video channels (six in/two out) in a 6-rackunit package. The XT3 also can supply up to 96 audio tracks. EVS supports a variety of codecs with the XT3, including the new Panasonic AVC-Intra.

For producers who need lots of easily carried storage, EVS unveiled the XFly Portable NAS Storage Case, with 8 TB of storage in a lunchbox-sized package. © 2011 NAB