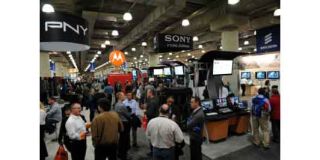 NEW YORK – There are shows for cars and shows for consumer electronics and, quite amusingly, shows where dressing up in costume at the front door is de rigueur.

It’s harder, however, to pinpoint how important a show like Content & Communications World can be, particularly because it’s gone through so many different iterations: it was born from satellite show parents, morphed into a HD-specific convention, and then evolved to become a show with both a military and government video spin.

Today, the evolved 2012 Content & Communications World (CCW) Conference program is attempting to both widen its breadth and focus while simultaneously offering an intimate convention that’s tailored to the needs of the 6,000 attendees who are expected to flock the Javits Center in New York City on Nov. 14 and 15.

“We’re in our seventh year of the show, which started as HD World, which was a spin off of SATCON,” said Michael Driscoll, CCW event director. “CCW came into play three yeas ago, because we felt HD would eventually become commonplace. And the show was beginning to expand into a lot of other markets, like 3D and 4K.”

This year’s show will now hold the umbrella for a number of simultaneous sister events, including HD World, Production+Post Expo, 3D World and SATCON.

“[The industry’s focus] is not just media entertainment, but also communication technology, and distribution and delivery, and IP delivery and all that,” Driscoll said.

This year’s convention will feature 150 speakers addressing trends in the field of content creation, management, distribution and delivery. And what the show attempts to offer is a unique, more personalized take on the trends impacting the industry.

Because sometimes technology doesn’t always wait for spring to sprout.

“It’s a nice compliment to NAB in a lot of ways,” Driscoll said. “In the last few years, everyone from broadcasters to cinematographers has had to curtail their travel to shows. This is a great opportunity for East Coast people to see of what they see at NAB, or to see new technology in November that was shown as a demo last April.” “It’s also a smaller and more intimate show, and more conducive to having in depth discussions,” he said.

Among the hot topics is the much-debated future of 3D. There’s been much talk about the adoption rate of the technology, and whether its been welcomed by consumers at a pace that can predict its long-term success.

“It’s all about perspective and context,” said Jim Chabin, president of the International 3D Society, who will serve on a panel called “3DTV on a Budget: Is it Possible and How” to talk about the future of the technology. He pointed to analyst figures that say that by year-end 2012, there will be 8.8 million 3D TVs in consumer households. The goal is to look at 3D as an ecosystem, he said, and not be discouraged by what some say is dismal acceptance of the technology.

Chabin will sit on the panel with Phil Orlins from ESPN, Rob Wilcox of Sony, and Craig Tanner, the visual effects editor for the film “Avatar.”

“Let’s understand where we are in that evolution and stop worrying about what’s happening this month,” Chabin suggested. “Instead of tying to say this [piece of news] is something profound, [let ’s realize that] this is a little piece in the ecosystem,” he said, pointing to the emergence of exciting new developments, like holographic three-dimensional screen-projection technology.

The appeal of 3D remains strong in the theatre market, with 30,000 3D theatre screens in existence worldwide. “And it continues to grow. We’re in the early days, but it’s a pretty impressive statistic,” he said.

Moving ahead, work needs to be done on the programming front, which is one aspect Chabin plans to discuss at the show.

“Device manufacturers say we need more content; content creators say they need more devices. That’s very typical,” he said. “Remember that CDs were slow to be accepted when everybody loved the cassette players – that’s a metaphor for every technological advance.

“We’ll talk about how these technologies develop and how to make our current business models work,” he said. “Many people are saying that there is no doubt that in 2020 just about every screen will be 3D if you need it or want it.”

The show will also touch other bright topics in the media, entertainment and communications lifecycle, from steaming media to pro audio. Sessions like “What’s the Future of Television” will look at the revolving door of technologies at a broadcaster’s disposal. Others, such as “The State of the Multi-Screen Experience,” will look at the real-world problems inherent in delivering media to multiple platforms. How do you smoothly create and manage managing multiple versions of the same content over many screens?

A highlight of the conference, said CCW’s Driscoll, is expected to revolve around 4K technologies. Sessions like “4K Acquisition: the Possibilities & Challenges,” will look at how digital filmmaking is being transformed with the launch of 4K cameras, and how the technology is bringing with it it’s own challenges and techniques. Digital cinema also makes the list with sessions like “Digital Cinema Basics,” which will look at pre-production and planning for HD-DSLR filmmaking.

New this year is the introduction of the Production+Post Studio, a live studio on the show floor that will let attendees tinker with technology to create a video of their own. The show is also seeing a bump in the number of AV attendees. “We didn’t’ set to target that, but they were coming more each year,” Driscoll said. “These AV integrators are moving into video, and not just handling screens in corporate enterprise rooms, but helping those companies with their video. As a result, they want to get more into all aspects of video.”

This year’s lineup of keynote speakers include industry stalwarts, from Jerry Steinberg, senior vice president of field operations at Fox Sports, to Larry Thorpe, senior director of professional engineering and solutions at Canon.

Coupled with a conference program that promises vendor-agnostic sessions – “without the vendor pitches,” Driscoll promised – and a show floor with 300 exhibitors, the show is attempting to find its zenith.

“Anybody using media or communications technology needs to catch the train from Boston or take a cab over from Midtown to evaluate a lot of vendors and get a lot of information on one place and at one time,” he said.