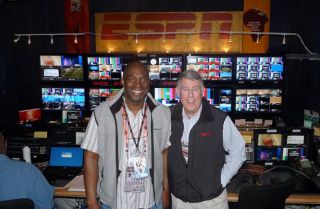 JOHANNESBURG, SOUTH AFRICA: The 2010 World Cup has been a watershed for ESPN. The U.S. sports franchise launched its 3DTV network with the opening of the tournament. The U.S.-Slovenia match drew the network’s highest number of households ever for a soccer game. Before Ghana knocked Team USA out last Saturday, total viewership in the United States was up around 70 percent from 2006.

It has around 400 people working at the events in South Africa; around 350 in technical operations and production, according to the daily MRL Newsletter. The U.S. network is said to be the second largest broadcaster at the game.

ESPN’s team built a studio set for pre-game, half-time, post-game and nightly news from Soccer City. Claude Phipps, director of special projects for ESPN, and Geoffrey Mason, head of 2010 production planning, (pictured above) are among the 400. Phipps is a veteran of “Monday Night Football,” plus several other live major league sporting events. He and Mason have been traveling to South Africa for nearly three years in preparation for the event.

“This is the biggest operation that ESPN has undertaken for a World Cup,” Phipps said, “and the response has been fantastic.”

ESPN pulled out all the stops for this World Cup, distributing it in HD on ESPN, ESPN2 and ABC, in Portuguese on ESPN Desportes. The coverage is also at ESPN.com, on ESPN Mobile TV and ESPN International. All 25 games being produced in 3D by host broadcaster HBS and Sony are being carried on ESPN 3D.

“We are bringing together all facets of the company to create a uniform coverage approach,” Phipps said.

ESPN has thus far carried 18 of the soccer matches in 3D--all supported by commercials in the format. The remaining seven will conclude with the final on Sunday, July 11. (The schedule is at espn.go.com/3d/schedule.)

May 26,2010: “ESPN Exec is Bullish on 3D Uptake”
“Sports fans are early adopters of technology, and we think that the genre plays very well in terms of the technology, and we're very optimistic about our plans.”