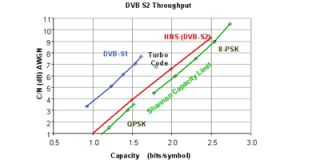 MULTIPLE CITIES—Europe’s DVB Steering Board has approved new extensions to the DVB-S2 specification—referred to as “DVB-S2X”—that offer spectral efficiency gains for professional applications of up to 30 percent and for some scenarios, gains of up to 50 percent can be achieved, when compared to the same satellite transponder bandwidth and emitted signal power using the first generation DVB-S standard.

The second-generation DVB-S2 (for Digital Video Broadcasting – Satellite) achieves significantly better performance than its predecessor, allowing for an increase of available bitrate over the same satellite transponder bandwidth. The measured DVB-S2 performance gain over DVB-S is around 30% at the same satellite transponder bandwidth and emitted signal power.

The second-generation DVB-S2 spec achieves significantly better performance than its predecessor, allowing for an increase of available bitrate over the same satellite transponder bandwidth. In addition, new operational modes such as channel bonding increase flexibility. The specification will now be sent to ETSI for formal standardization and the DVB-S2X “BlueBook” will be published shortly, according to the DVB Steering Board.

Alberto Morello, Chairman of the TM-S2 committee, said that the new enhancements were developed with close cooperation from European, U.S. and Far East companies; representing a variety of industry segments, such as broadcasting, VSAT and DSNG.

Morello said the need for the new DVB-S2X specification came from the providers of professional services and applications that wanted to take advantage of the latest technological advancements to support their growing services. The timely approval of DVB-S2X means it can be implemented with HEVC, the latest video coding scheme. It is anticipated that the volume demand for chip sets and equipment will be driven by consumer internet services and broadcasts of UHDTV with HEVC coding via DTH satellites. DVB Members contributed to the work on the specification with more than 200 input documents.

DVB-S2X provides more choices for roll-off factors as well as additional modulation and Forward Error Correction (FEC) options that allow for the more efficient use of satellite transmission channels.

Other key improvements to DVB-S2 include: additional framing and scrambling options for very low Signal to Noise Ratio applications, which will enable satellite services for mobile (sea and air) and very small antennas; channel bonding of up to 3 channels will support higher aggregate data rates and allow for additional statistical multiplexing gain for services such as UHDTV; better resilience to co-channel interference for broadcasting; and optional super-framing structure, opening the door to advanced interference mitigation techniques for interactive broadband services.

The inclusion of DVB-GSE/GSE-Lite protocols could facilitate the migration to full IP services in the future – particularly suited for broadcast/broadband service convergence in the home network.

“The satellite industry has been anxiously awaiting this standardization which will help it to improve profitability, interoperability and achieve further growth,” said Peter Siebert, Executive Director of the Digital Video Broadcasting (DVB) consortium of broadcast equipment and services vendors. The group said that over a billion DVB-compatible receivers have shipped worldwide.