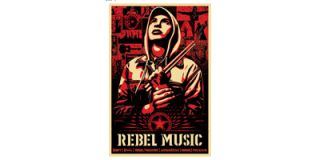 NEW YORK— The mtvU documentary series Rebel Music examines the lives of young people who use art and music to spark change around the world. The first two 30-minute episodes of the six-part series premiered on November 18, with the remaining episodes debuting weekly on the mtvU network and online at RebelMusic.com

Each episode of Rebel Music highlights a different country grappling with social injustice, from the revolution in Egypt and sexual oppression in India to a Mexican drug harbor struggling to reinvent itself as a cultural haven.

“Rebel Music mirrors the approach and philosophy I’ve embraced throughout my entire career: art as a catalyst for social change,” Fairey said in a press release. “MTV World has the ability to reach and give voices to young people around the world on a scale unlike a lot of other platforms, and it’s something to applaud.”

Two years in the making, the series entailed copious research. The production team worked with local crews as well as documentary luminaries such as Academy Award winner Ross Kauffman, co-director of Born into Brothels: Calcutta’s Red Light Kids, who served a consulting producer for the series in addition to photographing the India and Mali segments.

Equipment
Cinematographer Mikhail Galustov shot the Afghanistan, Egypt and Israel-Palestine episodes with a Canon EOS C300 fitted with a Chrosziel mattebox. “This setup was very convenient for handheld shooting, and the camera allowed him to shoot in low-light situations on the streets of Cairo without additional lighting sources,” says Andrew Ross Rowe, who served as producer, assistant editor and additional camera on the Egypt episode. “Protesters, graffiti artists and people posting flyers were all captured on the fly. We wanted it all to look natural, and that camera’s mark on the industry has always been low light. The camera was also amazing for B-roll scenics.”

For the Egypt episode, Ross Rowe employed a Canon EOS 5D Mk III as second camera. The camera was preloaded with Technicolor CineStylein order to match the look and feel of the C300 camera’s footage. The 5D was mounted on a monopod for interviews and operated handheld in the street. “We could approach a person or group much easier with what looked to be a still photo camera,” he comments. “It’s very disarming to use a smile and a smaller body for B-roll.”

From dust and dirt to rain and cold, shooting on the fly in any part of the world is not without its challenges. Add complicated political terrain and a little unrest, and almost anything can happen.

“In Afghanistan, it was rainy and snowy in the winter and dusty in the spring. The C300 and 5D Mark IIIs that we used all did pretty well, but at some point the C300 got some dust under the ND and protection filters, right on the sensor, probably through the ventilation system. It’s impossible to fix this issue in the field. You can only do it at a specialized Canon repair center. I couldn’t even fix it in Istanbul when I got back and had to fly to Moscow for a few days because of it.”

“During the main protests in Egypt, we couldn’t rely on cell service. There were points where we hadn’t heard from a splinter team and would get worried. Obviously plans change in the field. Our characters moved freely and we went with them. But I was always relieved to get a text from our fixer, Ahmed Medhat, director Simon Ostrovsky or series executive producer Nusrat Durrani, letting me know they were OK.”

“The C300 is a great camera. It was a good investment, too, because it’s so versatile and I can use it for most of my work. But it has a modular construction, which is a problem for documentary work. It’s fairly easy to break the connectors linking the LCD/audio module to the body in a crowded situation like a demonstration or a concert. That’s exactly what happened: a running protester bumped into me in Cairo and the in-camera part of the connectors bent and got loose. Luckily they stayed in place and still worked.”

“The Egyptian revolution turned out to be the largest gathering the human race has ever seen. Thirty-three million people took to the streets. Obviously things could have turned ugly and violent pretty quickly. But the hardest part of shooting in a crowd turned out to be pickpockets. Our crew and driver lost a cell phone and a tablet. Thankfully all the [camera] gear was safe and sound.”

In each region, the MTV crews worked closely with local crews and “fixers,” talented locals who are instrumental in quickly building trust with people and helping the production create context for their stories. With the safety of the series characters a priority at all times, these local heroes are responsible for ensuring a balance in the community after the production leaves.

“A local fixer is the person who makes it all possible. They are the missing piece that connects the crew to the local culture. A fixer helps keep your crew safe, schedules interviews, wrangles locations and has the local language to make things happen.”

“My Afghan team was pretty amazing in terms of knowing the place and finding solutions for the shots and interviews we needed. Whenever we needed to interview someone or get a shot of something in particular, our fixer Iqbal or local shooters Sahar Fetrat and Wakil Kohsar already knew what to do.”

“In Egypt, we were lucky to have a young, smart fixer, Ahmed Medhat. He was with us for the length of our stay, watching how we work. He had some broadcast journalism experience as well. After we left Cairo, I wanted to get follow-up interviews with our characters and hired Ahmed, who was able to get what we needed to finish out the show.”

“Border police in Afghanistan don’t care about equipment unless it’s an RPG. We were lucky with the police in the streets too. Usually they come and ask questions and try to make you pay a little money, but the local crew was quite amazing on this shoot and dealt with such issues brilliantly.”

“When I approached them about finishing our series for color and sound, Ian recommended a new workflow that made a lot of sense for Rebel. Basically, instead of delivering our series for a standard conform, we delivered uncompressed QuickTime files of each episode,” details series co-producer/co-director and post supervisor Maria Cataldo. “Since our timelines were so loaded with split-screens and micro-crafted transitions, we wound up separating out those layers of video in our timelines as stems. In our sessions, our colorist, Jeff Sousa, would work with us on our primary stem of picture before treating the other stems. Jeff worked on the [Blackmagic] DaVinci Resolve. It was a truly satisfying process that was actually fairly flawless, and I would absolutely consider moving forward in a similar situation with other projects.”

Cataldo worked closely with editors Giacomo Ambrosini, Natalia Babinski and Connor Kalista to help shape each of the episodes. “Our stories came together both in the field and in the edit,” she says. “What’s different about our show is that we were working without story producers, outlines or paper cuts of any kind. And since we were shooting in places that were unpredictable, though our preproduction was thorough, you couldn’t always plan for what was shot.”

“My Canon equipment is quite reliable in tough working conditions, although I still try to always bring backups of everything, from XLR cables to computers and lenses.”

“I rely on the confidence of knowing the gear I use in and out. That allows me to go into autopilot to concentrate on producing and capturing the events around me. It seems obvious, but I would never take a piece of equipment that I didn’t know like the back of my hand.”