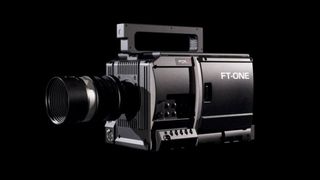 A couple of years ago, 3-D production, postproduction and display technology was exhibited everywhere at broadcast trade shows. It was hoped that the nascent technology could save an industry suffering from the collapse of HDTV set sales. Now that 3-D hasn’t caught on with the public, the industry is looking to shed the glasses and provide TV pictures more sharp and bright than HDTV.

Some would say the solution to geeky, expensive glasses and stereoscopic-induced eye strain in living rooms of the future could be ultra high-definition television (UHDTV) pictures that to many appear to create just a viewing experience just as immersive as 3-D.

Several international broadcasters, including Sky Deutschland and Canal Plus, said they are preparing dedicated channels for the near future as a new source of revenue.

“[UHDTV] will be the next big thing in broadcasting, taking the consumer experience to the next level,” said Ferdinand Kayser, COO of satellite bandwidth provider SES, while addressing a session at the IBC Show this week. “It will make linear TV even stronger and more compelling and ensure that satellite will remain the most powerful TV infrastructure in the future.”

Current bandwidth limitations have 4K as the most practical resolution to deliver to consumers, but the UHDTV spec (pioneered by Japanese broadcaster NHK and recently afforded worldwide standardization buy the International Telecommunications Union) includes resolutions up to 8K, or 7680 x 4320 resolution. NHK calls it “Super Hi-Vision,” and most at the recent IBC Show simply gawked in awe at the stunning pictures. Don’t get too excited about 8K just yet, as NHK said it won’t begin real-world broadcast testing of 8K until 2020.

However, 4K (3840 x 2160) resolution appeared a bit closer to home TV reality at IBC, where the equipment necessary to capture, compress, store, distribute and display such data-intensive content over satellite was shown in earnest. Missing from the traditional broadcast chain are an adequate video production switcher and graphics processors.

SES worked in collaboration with Sony to transmit live 4K content at the show. The dedicated video channel was uplinked from the SES headquarters in Luxembourg via the ASTRA Satellite System. The 4K programming, captured with a Sony F65 camera, was encoded and played out in the “Quad HD” format in the Sony and SES exhibit booths, using the H.264 compression standard, at a data rate of 50 Mb/s. It was displayed on a new Sony Bravia 84in 4K display (at a pixel resolution of 3840 x 2160), which is available for pre-order for roughly $25,000.

“Sony is committed to bringing ever greater viewing experiences to consumers around the world and 4K delivers on that promise,” said Olivier Bovis, head of AV media for Sony Europe. “This live demonstration with SES on our new 4K TV demonstrates that 4K satellite transmission may arrive in the home sooner than predicted by the industry.”

Canon continued its push into the world of 4K at the show, introducing Europe to the EOS C500, which originally debuted at NAB last April. Canon also unveiled the 4K-capable EOS-1D C DSLR and a series of 4K monitors. JVC also showed a 4K monitor.

The two new Canon 4K models — the EOS C500 and EOS-1D C DSLR — were demonstrated alongside Canon’s expanding 4K-resolution EF Cinema lens range, including both Cine Primes and new Compact Zoom Lenses. The EOS C500 is will be available in both EF- and PL-mount versions and features a 4096 x 2160-pixel Super 35mm-sized 8.85-megapixel CMOS sensor.

FOR-A Corp showed a new 4K variable frame rate camera, the first of its kind, called the FT-ONE. Using a high-sensitivity (global shutter) CMOS sensor and recording at up to 1000fps, the PL-mount camera captures about 8.5 seconds of uncompressed RAW data to internal RAM memory. The camera also includes two hot-swappable SSD slots for an additional 75 seconds of record time. It outputs two channels, one for 4K (1080p x 4) and another downconverted HD-SDI signal.

“Aside from 4K, it makes the best looking HD pictures you’ve ever seen,” said Pedro Silvestre, a sales director with FOR-A.

AJA Video Systems added to the 4K fire with the introduction of its Corvid Ultra card, which promises to not only aid in 4K filmmaking but also create the ability to easily extract and scale pristine HD images from a portion of the 4K frame in real time during a live broadcast.

Corvide Ultra delivers high-quality I/O, processing and scaling for multiformat 4K/2K and HD/dual-link/SD workflows. It features support for 2K and 4K DI workflows as well as high-quality scaling capabilities for all resolutions.

“Everyone is trying to figure out how to make 4K workable and manageable today,” said Bryce Button, AJA’s product marketing manager. “If you are a broadcaster, you are not going to be able to broadcast 4K today. But the broadcasters are really interested in using these cameras within [the HD workflow]. That is where Corvid Ultra comes in.”

Blackmagic Design showed a new PCI Express capture card, the DeckLink 4K Extreme, that now includes all the features of its popular DeckLink HD Extreme 3D card, plus adds 4K playback that is four times the resolution of 1080HD video and a much faster PCI Express Generation 2 connection to allow higher resolution video standards such as 4K.

The dual-link 3Gb/s SDI connection for 4K is a new video standard being pioneered by Blackmagic Design and takes the old quad link HD-SDI connections and multiplexes them to reduce cable count and router crosspoints required to route 4K signals.

“As 4K comes of age, media organizations face the challenge of efficiently and cost-effectively delivering a more immersive and engaging visual experience to their demanding audiences,” said Tomas Petru, president of Visual Unity.

“4K Gateway is an elegant solution to this challenge as it addresses the need for high quality and reliable transmission of high resolution content, whether it be for collaborative film post production, the streaming of live events in digital cinemas or e-learning in medical and educational establishments.”

As for the lack of 4K video switching, John Naylor, direct of video switcher products for Grass Valley, said it is technically possible to take a current generation video switcher and use the Key and Fill channels to accommodate the four HD signal paths that a live 4K broadcast production would require.