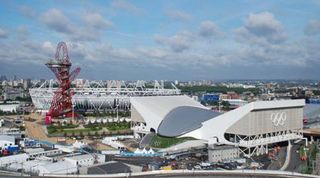 7th Wave and Dejero have built out a long-range private Wi-Fi network at 7th Wave’s rooftop location overlooking the Olympic Park that will provide broadcasters with coverage across the park and surrounding areas. Using Dejero’s LIVE+ mobile transmission products on the private Wi-Fi network, broadcasters have the ability to transmit live video directly into 7th Wave’s media centre, where it can be uplinked to any destination around the world. With this private network in place, live HD and SD transmissions can be broadcast with high quality and short latency, even if minimal or no bandwidth is available from the cellular networks.

As well as the Olympic Park location, where 7th Wave have panoramic views of the Olympic Stadium, aquatic centre, orbit tower and the London skyline, Dejero and 7th Wave will be establishing broadcast Wi-Fi hotspots at London’s Carnaby Street and the Houses of Parliament, where the Dejero LIVE+ platform of products can be used to transmit live broadcasts.

“With hundreds of thousands of mobile phones in use near the Olympic venues, the cellular networks are expected to be highly congested during the Games,” said Todd Schneider, COO at Dejero. “The establishment of the 7th Wave-Dejero private wireless hotspots will provide broadcasters with a very strong and reliable cellular network supplement that can be used in conjunction with Dejero’s LIVE+ platform of wireless transmission products.”

“We are delighted to be working with Dejero on this innovative live transmission service,” commented Andy Tweedley of 7th Wave. “We believe that broadcasters will quickly see the benefits of this high quality and cost effective means of transmitting live content worldwide from around the Olympic Park and at other key London locations.”

To access these private hotspots, broadcasters can bring their own Dejero LIVE+ 20/20 Transmitters or iPhones and iPads with the Dejero LIVE+ Mobile App software installed. LIVE+ 20/20 Transmitters can also be hired directly from the 7th Wave facilities. 7th Wave will also provide iPhones and iPads pre-loaded with the latest Dejero LIVE+ Mobile App software; this enables broadcasters to deliver live breaking news, or record and instantly send video to viewers and stations around the world, without needing additional cameras and equipment.