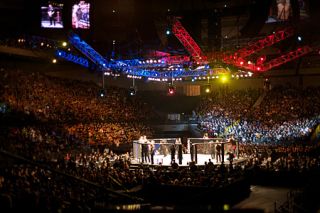 TOKYO: From Bexel: “When the UFC made its long-awaited return to Japan last month at the Saitama Super Arena,ConCom, Inc. and Bexel... joined forces to replicate the classic UFC experience for viewers watching UFC 144 live in Japan and across the world on pay-per-view, Fuel and FX. To meet the production requirements for the live fight and surrounding events, Bexel recruited its customizable Hercules Flypack for ConCom, Inc.

“Essentially, we had to be creative and bring our entire show from the U.S. to Tokyo,” said Greg Louw, director of technical operations for ConCom UFC events. “Not only did we anticipate a language barrier, but we also didn’t have the trucks we were accustomed to there to facilitate our needs. The key was coordination and preparation.”

More than just a one-night event, setup began on Tuesday, with a live weigh-in show taking place on Friday on Fuel, followed by the live fights and post-show on Saturday and Sunday. The PPV event took place at 9:30 a.m. Sunday local time to ensure viewers in the United States could watch live Saturday evening.

The Hercules Flypack allowed the team to create a control room and edit suites within a series of tents inside the venue. Included in the control room were the new Sony MVS-7000X 4 M/E multi-format digital 3G production switcher; Calrec Omega console with Bluefin; an Evertz EMR multiformat video router; an Evertz audio router; multiple EVS LSM XT[2+] six-channel HD DDRs and a mix of Sony and PanasonicmultiformatHD VTRs and Sony HDC 1500 cameras—12 in total—along with a HDC 3300 Super motion camera system. Highlights inside the edit suites included six Avid edit stations, which were all networked through a file transfer manager with the EVS equipment to edit and transfer the footage in real-time. Edit included a complete Pro Tools suite for audio sweetening.