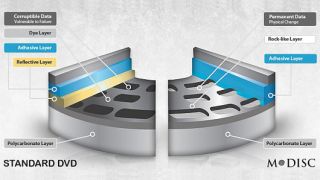 AMERICAN FORK, UTAH: Melleniata, a startup company from the Salt Lake City area, has unveiled a new optical disc technology it claims could safely store data that would last up to 10,000 years. The company plans to team up with Hitachi-LG to market the product line, which includes recordable disc and player, starting this fall.

Data is stored on the M-DISC by creating permanent physical pits that don’t deteriorate over time.

Melleniata says its M-DISC is constructed of a patented rock-like data layer made of inorganic materials and compounds including metal and metalloids, and can maintain its integrity from room temperature to conditions exceeding almost 1000 degrees F. Data is written to the disc at far higher temperatures, using up to five times more energy than typical DVD recorders and it can’t be overwritten, erased or corrupted by natural processes, according to the company.

Unlike ordinary DVDs, which use organic dyes that can break down over time, resulting in unused or corrupt data, data is stored on the M-DISC by physically altering and creating permanent voids or physical pits on the data layer.

The company says the Naval Air Warfare Center at China Lake, Calif., tested the M-DISC against the best archival discs from Mitsubishi, Verbatim, Taiyo Yuden, Delkin and MAM-A and that its M-DISC was the only one that did not suffer data failure after the exposure cycle.