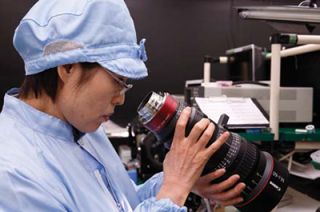 The Canon DP-V3010 4K Reference Display will be available Q1, 2014.MELVILLE, N.Y.—Canon announced its official entry into the professional display market with the launch of its DP-V3010 4K Reference Display. The display, which targets the growing 4K production market, measures 30 inches wide diagonally by 7.4 inches deep to help maintain space requirements and provides a 2000:1 DCI-compliant contrast ratio, uniform brightness, very wide viewing angles in all four directions, and internal color calibration, among its many features. The $40,000 display will be available in Q1, 2014.

The DP-V3010 features a wide color gamut range which encompasses Adobe RGB. Canon, best known in the broadcast industry for its high-end lenses, began to get e a foothold in the professional video market with the popularity of its 5D Mark II DSLR camera. In response, the company introduced the Cinema EOS system two years ago, in anticipation of the growing 4K production market. The display complements Canon’s growing line of image capturing products and is designed to provide a high-end imaging reference for use in color-grading, digital intermediate (DI), CGI/animation/ visual effects (VFX), and editing/finishing suites, as well as digital imaging technician workstations on production stages. The display provides full screen 4096 x 2560 resolution with what the company terms, “extremely high levels of color and fidelity.”

Canon Focuses on Its Imaging Future

TOKYO—From relocating to new and expanded U.S. headquarters in Melville, N.Y., to expanding its product line to now encompass reference displays, Canon has been demonstrating its confidence in the growing market for advanced imaging technologies in 2013. That confidence was on display recently during a press tour in Japan in which the company laid out some of its plans for the years ahead.

“Our core mission is to expand the image capture domain,” said Elliot Peck, senior vice president and general manager for Canon U.S.A. Imaging Technologies and Communications Group in his opening statement. Peck noted the two-year anniversary of the launch of the company’s Cinema EOS product line, which expanded the company’s presence in high-end digital cinematography. “I really believe that our C100 and C300 [cameras] have opened the doors to many new and upcoming inspiring photographers, cinematographers and documentary makers to be more creative and be able to tell their story,” he said

Canon’s Utsunomiya plant serves as both fabrication center and technical support for Canon lenses. The storytelling aspect behind Canon’s digital cinematography product line—which also encompasses its traditional lenses for broadcast—will be further illustrated by an upcoming documentary produced by noted filmmaker Michael Apted. Although the title of the film is yet to be determined and is still in post production, the press was given a sneak preview at Canon’s newly built 4K theater at its suburban Tokyo headquarters.

The intent of the film, according to Larry Thorpe, national marketing executive with Canon U.S.A., is to not only highlight the relevancy of 4K imaging technology but to also “demystify and perhaps humanize that deep mysterious optical science of lenses which very few people understand and let people see the human beings behind the design, manufacturing and assembly. That has been a major effort on behalf of Canon.”

4K NOW
The event also included a factory tour that gave the press a rare glimpse behind the manufacturing and assembly of Canon’s lenses at its Utsunomiya facility. The plant serves as both fabrication center and technical support for Canon’s optical products and features an intensive nine-month training program for high school graduates; since the program was initiated in 1959, more than 3,000 employees have completed the program.

With 4K (and eventually 8K, at least for Japan) on the immediate horizon, Canon executives noted some significant strides made in the expansion of the format, including plans to have Japanese astronaut Koichi Wakata shoot footage of Comet ISON on the Canon C100 from the International Space Station later this month, the first ever use of 4K technology for this purpose.

In addition, Canon’s C500 camera, which allows for RAW signals to be interfaced with external broadcast distribution technology, has opened the door for experimental live 4K@60p transmissions of soccer games in Japan, one of a number of recent C500 4K demonstrations that also included use of the C500 for digital zooming replay analysis with the NFL and MLB, among others.

Broadcasters moving to tapeless acquisition have been increasing their use of Canon’s EOS digital cinema cameras, particularly in television news magazine formats, according to Thorpe, who adds that the EOS platform fits in well with certain broadcast production workflows. “News magazine shows like PBS ‘Frontline’ and CBS’s ‘60 Minutes’ use [the C100] constantly now and we didn’t quite anticipate that,” Thorpe said.

Hiroo Edakubo, advisory director with Canon’s Image Communication Products Operations echoed Thorpes’ conclusion. “When we designed the MKII, our inital user target were video producers,” he said. “However, after launching the product in the market, we found that many broadcasters were using it, so when we design the next model, we would like to incorporate feedback from the broadcast industry as well.”

FUTURE PROOF
For the motion picture and documentary production community, the display comes at the right time for the 4K market, which is in various stages of acceptance among the film and broadcast communities.

“People are already beginning to shoot in 4K because they know that they can future proof their content,” said Chuck Westfall, technical advisor to Canon’s professional engineering and solutions group. “Even if they’re not going to distribute their content right away, they need to upgrade it because over the next 3-5 years, we expect 4K to become dominant and they they’ll be able to use a 4K reference display as part of their overall editing process.”

PIXEL BY PIXEL RESOLUTION
Westfall emphasized the importance of having the ability to examine exacting picture resolution on a professional display dedicated to 4K. “If you’re going to shoot in 4K and capture that way, you need to have a monitor that will give you a pixel-by-pixel representation of what you captured rather than an interpolation,” he said.

Color accuracy is also paramount, Westfall said, adding that the color gamut is “very very wide” compared to most other displays on the market. The DP-V3010 is compatible with five major color gamut standards: SMPTE-C, EBU, ITU-R BT.709, DCI as well as Adobe RGB. “The Adobe RGB space is a very good space for people working in motion picture production to be able to come close to what they are actually capturing in their RAW video,” Westfall said.

Canon has been demonstrating the display at the NAB Show, among other venues, over the past year and Westfall said customer feedback helped in further development of the product, including calibration.

“Part of the development effort on this monitor was to not only allow a very fine degree of calibration but also to build the monitor in such a way that whenever calibration had been applied, that it would hold that information as long as possible,” Westfall said.