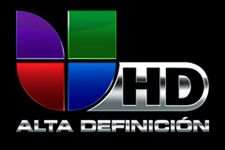 Cablevision said it now offers its subs more than 100 HD channels — which would be somewhat more channels (versus "choices") than most other cablers currently provide, but not as many as the two major satellite firms, DirecTV and Dish Network.

Univision said it's by far the most-viewed Spanish-language broadcast network in America, covering about 95 percent of all U.S. Hispanic TV households. TeleFutura Network, it said, penetrates more than 85 percent of Hispanic homes.

Hispanics now represent the largest ethnic minority in the United States, according to the U.S. Census Bureau.