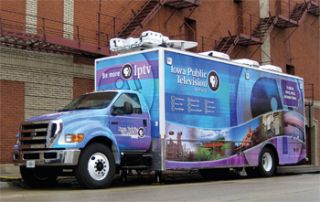 JOHNSTON, IOWA
Here at Iowa Public Television, we typically do two types of electronic field production (EFP): long-form documentaries and live or live-to-record productions such as sporting events and concerts. Each type of EFP production has different staff and resource requirements that test our limited budgets.

IPTV’s remote vehicle can be operated by existing staff and produce network quality programs in high definition from any venue. Long-form documentary productions are generally shot in pieces at various locations and assembled in an HD edit suite. With live or live-to-record production, we capture the event as it happens and present it so that the audience has a sense of being there. Many of the same skills and collaborations required for long-form production are needed, but the opportunities for experimentation and refinements are limited. Once the action starts, whether a sporting event or a concert, the die is cast. If the orchestra makes a mistake, the audience sees it just as the live audience did. If the production crew makes a mistake, the viewing audience will see it, even if the event audience didn't. The opportunities to correct errors doesn't exist, so pre-production planning and rehearsals are crucial.

During our conversion to digital over the past decade, we saw an increase in the opportunities for live productions. But because of the relatively low number of HD-capable trucks available, we once again looked into purchasing our own production truck. We had our own production truck at one time, but due to an earlier budget crunch (prior to my arrival), the number of productions had declined and it was cheaper for us to rent.

We developed and documented a basic set of capabilities that the truck had to have in order to do the type and quality of productions that we typically undertake. We also factored in some limitations on the size and type of vehicle. Initially the plan was to try and build a mobile production platform on a truck frame that didn't require any specialized driver licenses or training. One of our initial plans was based on a motor home chassis, and since Winnebago is an Iowa company, we met with them on several occasions to refine designs. Ultimately that path was abandoned because the limitations on capabilities was greater than our production needs could tolerate.

We used the documentation and plans to create an RFI and distributed that to all of the companies that built remote vehicles to see what they would recommend for a vehicle. Although we were on track with the one-piece vehicle, all of the vendors came to the conclusion that the weight of the vehicle would require the driver to have a CDL license.

After reviewing all of the information we received from vendors and some additional meetings with the local production team, we created an RFP to begin the formal purchasing process. From that procedure we selected Frontline Communications to build the truck and worked with them to finalize the design and select equipment. Since we did not have specialized remote production staff, we determined that as much as possible, the hardware in the truck had to be the same as the hardware we used for studio productions—local staff would have to be familiar with the equipment. For the types of productions we do, many of the graphics and stills can be pre-produced. The truck is equipped with the same Sony 1550 cameras, Chyron graphics engine, SSL audio console and Ku uplink equipment that we use on a daily basis in our studio productions. The only primary piece of equipment we had to compromise on was the switcher. At the studio we use a Grass Valley Kalypso but the control surface was too large for the truck so we installed the GVG Kayak, which has the capabilities we need for production and the footprint for the truck.

The completed truck has now been on the road for almost two years and overall we have been very satisfied with the performance. Though not as easy to roll as we had initially envisioned, the vehicle still doesn't require the effort and maintenance of a big rig. Packing the capabilities of a six-camera remote production truck into a two-axle vehicle does require some compromise, especially on creature comforts. But the end result is a remote vehicle that can be operated by our existing staff and produce network quality programs in HD from any venue.