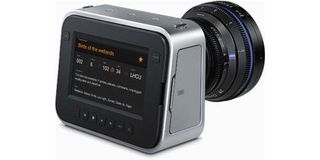 The camera has also been certified by Intel for capture and playback with Thunderbolt computer hardware operating under Windows.

The new time-lapse recording feature allows customers to capture video in CinemaDNG RAW 2.5K, Apple ProRes or Avid DNxHD. Customers have a wide selection of capture rates with this recording feature; they can select from every second frame all the way up to one frame per 10 minutes.

With the addition of Windows for Thunderbolt, users with certified Thunderbolt hardware will now be able to use a range of Windows-based software as well as Blackmagic’s UltraScope and Media Express software over Thunderbolt with the camera.

Support for Windows-formatted ExFAT SSD disk has been added to increase flexibility for customers who can utilize either HFS+ or ExFAT formats. ExFAT is a Windows-based operating file system that features technology, including large-sized disk and file support, wide compatibility and high performance. Mac OS X also supports ExFAT disks, so these disks can be plugged into both Windows and Mac OS X machines without third party software.