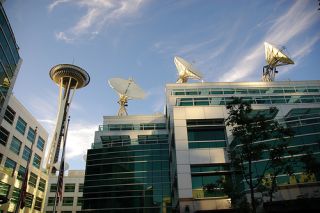 SEATTLE: The struggle for control of Fisher Communications intensified this week in a pair of scathing communiqués to shareholders, who will vote either to support the current management or allow an unsolicited bidder to take control of the board.

Nine of Fisher’s 10 board members sent a letter imploring shareholders to reject a takeover by Huntingdon, a real estate investment trust based in British Columbia. Huntingdon made an unsolicited bid for Fisher last December, offering shareholders about $24 a share. It was rejected. Huntingdon is now trying to get four of its own on the board in a proxy contest. In this week’s shareholder letter, nine Fisher board members went after the tenth, David Lorber, who is also on the board of trustees for Huntingdon.

“Mr. Lorber has criticized the board for its quick rejection of the Huntingdon proposal; however, the equity markets quickly confirmed the board’s assessment,” it said. “Fisher’s most recent closing share price on April 11, 2011 was $29.86, approximately 25 percent higher than the value implied by the Huntingdon December 2010 proposal.”

Huntingdon’s proposal came weeks after Fisher made a non-public, internal disclosure about positive fourth-quarter results. The letter said Lorber’s knowledge of Fisher’s performance and his connection with Huntingdon created a conflict of interest. Had the board accepted the offer, Huntingdon would have benefited at shareholders’ expense, they said.

Huntingdon’s largest shareholder, Stamford, Conn.-based FrontFour holds a 2 percent interest in Fisher. The letter called FrontFour a “hedge fund that is focused on reaping a significant shot-term gain.” FrontFour purchased more than 90 percent of its share since May 4, 2010, it said. The Fisher Nine say FrontFour’s plan is to take control and sell the company “when valuations of broadcasting stocks remain near the bottom of the market.”

FrontFour answered this morning with a letter of its own, saying the one from the Fisher Nine was “full of misleading propaganda half-truths and false claims about FrontFour.” The current Fisher board has “presided over massive losses of stockholder value” and has failed to hold President and CEO Colleen Brown accountable, it said. The FrontFour letter states that under Brown’s management, Fisher has lost $173 million in equity value. The Fisher Nine dispute FrontFour’s charges, saying they omit results from 2010, when Fisher’s revenues were up 32 percent from 2009.

Three of the Fisher Nine are up for proxy contest—Anthony B. Cassara, Richard L. Hawley and Michael D. Wortsman. Roger Ogden, the retired president and CEO of Gannett, was nominated by the nine in March.

The vote is scheduled to take place at Fisher’s annual meeting in Seattle May 11.
~ Deborah D. McAdams

(Image of Fisher Plaza in Seattle by Mike Gilbert Photography)