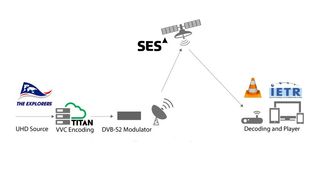 The test transmission is using an SES satellite positioned at the 28.2-degree East orbital position and is relaying a 4K UHD  video stream using VVC.

Source UHD video is being encoded with VVC and encapsulated in MPEG-TS using Ateme’s Titan Live video processing platform. The streams are modulated using DVB-T2 and broadcast via an Astra 2E transponder that covers all of Europe, the company said.

On the receive side, the signal is being demodulated by a DVB-to-IP gateway. It is then forwarded to the VLC player that displays the video in real-time using the OpenVVC decoder from IETR.