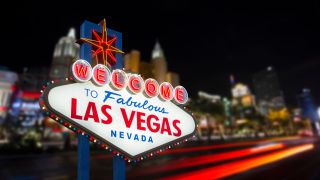 The stations, Sinclair’s KSNV NBC and KVCW CW affiliates, Nexstar’s KLAS CBS affiliate and Scripps’ KTNV ABC affiliate, are sharing a single 6 MHz channel and transmitting from Sinclair’s tower on Black Mountain outside the city. The launch is significant because it is the first full-power, multistation commercial deployment of NextGen TV in the country. BitPath, formerly Spectrum Co, led the planning and coordination efforts to put the stations on air.

Mark Aitken, Sinclair vice president of Advanced Technology and president of ONE Media 3.0 LLC, discusses the Las Vegas 3.0 launch, the cooperation among competing broadcasters needed to make it happen and what the rollout means more broadly for NextGen TV deployment and to him personally.

TVTechnology: Congratulations on the NextGen TV commercial broadcast rollout in Las Vegas along with Nexstar and Scripps.

Mark Aitken: Let me tell you, in the midst of COVID-19, this has been a fairly monumental task to pull this off.

TVT: How have you managed to do that during the pandemic?

MA: The fact that we have been able to get this together in the midst of a pandemic without the deployment of additional resources is remarkable. We have not flown anybody into or driven into the market. We are using on-ground personnel.

We are using ready-baked solutions. For instance, when it comes to video distribution, we’ve gone to LTN. When it comes to switches that allow the flow of IP packets as relates to ATSC 3.0, it’s conventional Cisco gear. We’ve got cloud-based solutions that are being played out and ready-made hardware. We’ve done all of this without deploying additional in-market resources.

TVT: Tell me about the setup. Is NextGen TV being transmitted from a Big Stick or via a single frequency network (SFN)?

MA: We are making accommodations for an SFN in the near future. Actually, those efforts were underway for NAB, but lack of hands on ground due to the COVID-19 outbreak sort of postponed that.

So it’s our Big Stick. We are converting our primary station in Vegas, KSNV, the NBC affiliate, to 3.0 and we are doing channel shares with Scripps and Nexstar in the market.

TVT: How are you allocating the bits among the three broadcasters’ four ATSC 3.0 channels?

MA: You know, that’s a question that comes up in every one of the channel-sharing/host-station discussions. In the days when you had just one stream and it was a transport stream, it was fairly easy to say, “We are going to give you X amount of bits as your capacity.” And you would multiply those inside your transport stream.

Because of 3.0’s multiple operating modes, it really comes down to what we call spectrum utilization. You have fundamental, sort of atomic, building blocks for all of the standards, and there’s a finite, fixed amount of those that are referred to as samples. You have a sampling rate.

So, we look at the spectrum and in a certain sense, we are saying to all four partners, “You’re going to have an equal share of that spectrum capacity. Choose your operating mode.”

The operating mode is chosen, and that yields X amount of bits. Three of the four are sharing one physical layer pipe [PLP] and the yield to each of them is on the order of 6-plus Mb/s.

That is the level of service that closely approximates ATSC 1.0 in receivability over the air. Then there is one PLP for the NBC, which is operating in a robust PLP with lower signal-to-noise requirements and is aiming to be received both in the conventional over-the-air environment as well as by portable and nomadic devices.

There are so many issues. The carrier-to-noise is one of those issues. Doppler is another. There are all of these interrelated components.

There is an extra level of robustness for the NBC station. That station is operating at about 8dB better C/N performance.

PLUS: ATSC 3.0 Deployments: Where and When Will NextGen TV Be Available?

The NBC channel is taking the NBC mezzanine level standard 1080i feed, and with professional equipment is being converted to 1080p with sampling conversion to HDR via SL-HDR1. So the NBC programming will actually come across with TV sets that support HDR and SL-HDR1. Those devices will display HDR.

Devices with an ATSC 3.0 receiver but standard dynamic range are capable of receiving the signal and displaying content.

MA: The networks are not providing extended content, so not everybody is taking the best feed that is available to them, which is typically a mezzanine level, high bitrate AVC that’s being converted to HEVC.

TVT: Tell me about BitPath’s (formerly Spectrum Co’s) role in working with these competitors to bring about an agreement to share a channel for 3.0 service and accommodate the 1.0 channels displaced by 3.0 rollout.

MA: They were the driving, coordinating force in the hosting agreements for all of the participants. And we prefer to think of them as hosting agreements. So BitPath is preparing the way to engage multiple broadcasters—and this has always been the business plan.

TVT: Where do you go next after the Las Vegas rollout?

MA: This is the first of many. We have a cascading series of launches. Next month, we are looking at Pittsburgh and Salt Lake City. Directly on the heels of that, we’ve got Nashville. So, June is going to be a very busy month doing the same thing with multiple partners, broadcasters, in those markets.

We have literally not let up on the gas of transforming markets.

You think about the announcement from FCC Commissioner [Brendan] Carr last week on broadcaster utilization of 3.0 for data delivery, IP bit delivery. Those things become transformational for all of broadcast TV.

TVT: As the economy weakens and looks to be headed for recession due to COVID-19, do you anticipate Sinclair pulling back on plans to roll out 3.0 markets?

MA: First, I am not going to comment on the long-term economic impact of COVID. Obviously, there is an impact.

When you look at how you transform a market, the primary step in that transformation is converting an ATSC 1.0 site to ATSC 3.0. That is not a huge capital outlay, so the transmission facility already exists.

Everybody is looking at the future of their business. For a modicum of investment, they can begin to make that transformation process. I think more and more broadcasters are looking at this and saying that it’s a bit of a no-brainer.

You get all that stuff done, and all of a sudden the ball begins to roll.

TVT: You have affiliates for NBC, CW, CBS and ABC involved in this Las Vegas rollout. Is this a sign that the networks are onboard with 3.0 and willing to accept things like simulcasting their content on a 1.0 and 3.0 channel where they had objected to a similar scenario when Mobile DTV (ATSC M/H) made its failed attempt to get traction?

MA: The fact is that with M/H to get the networks to sign onboard, what you were doing was inside of your spectrum was a simulcast. And there is a lot of legal “thou shalt and thou shalt nots” in the licensing of content.

And it was happening at a time when content providers were engaged in getting content onto the other wireless mobile platforms, and nobody wanted to stand in the way of that.

I think the real signaling that is coming out of a cascading series of markets that are coming online is No. 1, the broadcasters are committed.  No. 2, the content providers understand the success of reaching people wherever they are with the best platform that is available to them.

So, if you were a content provider and you are trying to reach the largest audience you would not preclude a new entrant—think of ATSC 3.0 as a new entrant in terms of carriage because it is different kind of over-the-air. I would say it’s a Kumbaya moment, but everybody is working as civilized capitalists who are looking for opportunities, including ones that may reshape the wireless landscape.

TVT: What does this launch mean to you personally?

MA: It’s emotional. You know, the company and our people have done a lot of firsts. The first ATSC 3.0 was done in Vegas by us for a Korean audience; the first mobile use of 3.0 was demonstrated in Las Vegas with an STA [special temporary authorization from the FCC].

[It’s been] eight years in the planning on this standard. But to see internally the entirety of our organization now focused on this as its future, that is probably the most rewarding piece of almost 21 years of stepping up to the plate to place a multidimensional standard and toolkit into the hands of broadcasters.

You actually managed to have me draw a few tears on that one. It’s monumental. This is my lifetime achievement. And I did not do this alone. Together, we are reinventing the future for broadcast television.