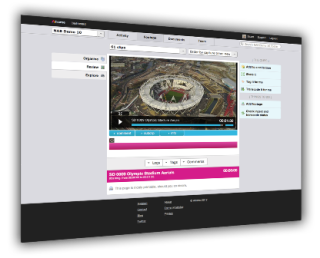 The ODA retained TV production firm SMS Media in London to produce a package of promotional video clips. SMS Media used Azimuth to produce the content, which featured HD and SD footage of the Olympic Park, including aerials and time lapse.

Azimuth tapped Aframe's online service to send ODA’s content to Olympic-accredited broadcasters across the globe, including the BBC, ITV, Sky, NBC and CNN. Azimuth also used Aframe to add summary metatags to the footage, so that broadcasters could quickly find and select specific clips by searching them by name.

“By adding metatags to the video, broadcast users could find the exact clips they were looking for using simple keyword searches,” Azimuth Post’s Neil Hatton explained. “This really helps in the process of putting news pieces together.”

As Olympic film crews, production teams and journalists descend on London, Aframe’s network is already being tapped to assist them with high-speed uploads and ingest of footage to be sent back home, and with faster, easier collaboration on broadcast-quality content for the London 2012 games.