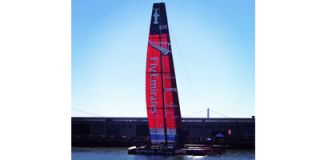 “Our goal was to stream live and pre-recorded program material back to New Zealand over the internet from San Francisco into the Television New Zealand Television Centre in Auckland for playing on our flagship TV ONE television channel and live streaming back out on the internet through tvnz.co.nz,” said John West, executive vice president of sports events for TVNZ.

West’s team selected the Adtec EN-91P encoder and the RD-60 decoder for the project.

“During the early round robin competition of the Louis Vuitton Cup there was no host satellite coverage, and we were unable to get a fiber drop at all, so the easy to configure and advanced IP connectivity that Adtec provides was a very attractive option,” West said, explaining that Adtec had previously tested streaming from London and San Diego to TVNZ in Auckland.

TVNZ chose the Adtec encoder setup for a 5Mbp/s stream, which was determined as the optimal bandwidth. They also selected the SD 625i 50 video with 4.2.0 color coding and 2 stereo audio channels, according to West.

During the Louis Vuitton round robin racing that began July 4 there was no host coverage and no satellite path available, so the Adtec encoder and decoder were used extensively to feed edited coverage packages back to NZ. The Louis Vuitton semi-finals started in August, along with host coverage and a satellite path back to New Zealand, and the Adtec equipment provided an independent streaming unilateral path for news stories and stand-ups.

“We are now into the America's Cup Finals, and we have full host coverage and satellite distribution, so the Adtec equipment is providing an invaluable unilateral channel back to NZ for additional content,” said West.